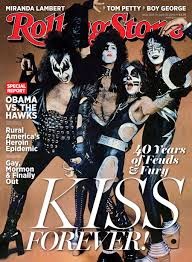 KISS Double Platinum was the first CD I ever bought. It contains all the essential KISS tunes you need. Going much beyond that into deep album cuts and the band kind of loses its charm. That said, the band's top 15 to 20 songs is as good as any power pop or hair metal bands' top tunes.

The other side of KISS is the mythology, and Rolling Stone Magazine recently captured that extremely well in its lengthy cover feature. Here are my 13 favorite take aways: