Paul McCartney On the Run in the 1970s 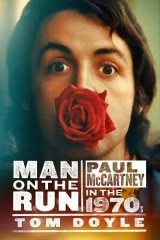 In the introduction to a new biography of Paul McCartney's surprisingly under-reported 1970s era, author Tom Doyle discovers a very human side to a person oft-perceived only as an international and almost beyond-human treasure.

"Between 1969 and 1981, McCartney was a man on the run - from his recent past as a Beatle, from his horrendous split with his bandmates, from the towering expectation that surrounded his every move. Behind his lasting image during that period as a Bambi-eyed soft-rock balladeer, he was actually a far more counterculturally leaning individual (albeit one overshadowed by the light-sucking John Lennon) than he was ever given credit for - freewheeling in his hippified way, taking to the road with "a bunch of nutters" for an impromptu, disorganized university tour with the proto-Wings, viewing the world through perma-stoned eyes, and defiantly continuing to flip off the authorities the world over who sought to criminalize him, all the while adopting a shrugging, amused attitude to it all."

Here are some other nuggets from the opening of Man on the Run: Paul McCartney in the 1970s that have my mouth watering to get back to the rest of the book soon.