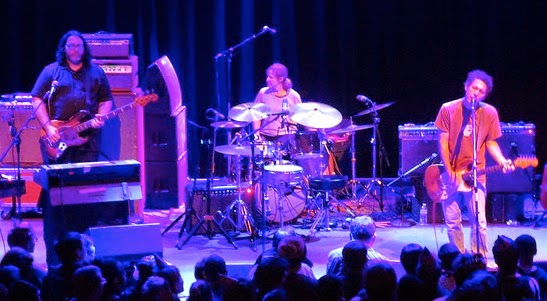 I hadn't seen Hoboken, New Jersey's finest, Yo La Tengo since the mid-90s, when they played in St. Louis on the Painful tour (still their best album) and also in an intimate setting in the basement of Washington University's student center, where leader Ira Kaplan proceeded to pound his keyboard with precision and play guitar solos like Jimi Hendrix.

I loved the band's early albums like May I Sing With Me and New Wave Hot Dogs. But I haven't been all that into their less poppy, more spacey releases of the past decade-and-a-half.

That's why this special "Yo La Tengo at 30" tour in only New York, Philadelphia, and D.C. appeared to be the perfect show. A career-spanning set rather than a show that would focus on the new stuff. And the band didn't disappoint, especially at the start of the night.

"Ohm," the one great song from their newest album, began the show churning at just the right pace. Then "Double Dare" from Painful soared with its diving guitar parts. Their loud-soft dynamic was displayed with a few numbers, including "Beanbag Chair" from Electropura.

The full house was then treated to oldies like "Lewis" from New Wave Hot Dogs, "The Pain of Pain" from debut Ride the Tiger, and "Satellite" from May I Sing With Me.

Late in the show, when Kaplan wasn't doing his patented freak outs, highlights included covers of "Little Honda" by the Beach Boys and "Take Care" by Big Star, along with original "Autumn Sweater."

This was by no means a best-of setlist, but it also displayed just how deep and enjoyable Yo La Tengo's catalog is over its 30-year life thus far.