Going to Space With Dogs and Robber Barons 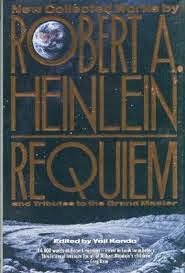 Robert A. Heinlein is one of my favorite authors, based pretty much solely on Stranger in a Strange Land (#10 on my top novels of all time list) and to a lesser extent Starship Troopers.

So it was finally time to delve into his shorter works, published in book form for the first time in 1992 in a collection of short stories, novellas, speeches, and tributes entitled Requiem and Tributes to the Grand Master.

The short story Requiem leads off the book and is the sequel to Heinlein's novel The Man Who Sold the Moon. It is the story of businessman Delos David Harriman, who, is obsessed with being the first man on the moon. And further, he wants to own it. Published in 1951, Heinlein wasn't too far off from what panned out in real history in that Harriman's company succeeds in getting the first rocket to the moon in 1978. But he himself is not part of the first colonizing effort.

That is where Requiem takes over the story. The "tycoon and latter-day robber baron" is now very old and nearing death, and has still not personally reached the moon because his business partners always insisted they needed him on Earth. Once his business contract expires, he is no longer fit enough to pass the health tests required to travel to the Moon, so he enlists some junk spacemen at a carnival in Kansas City to illegally rocket him there. Harriman reaches the Moon and quickly dies on it.

Requiem is surely a satisfying end of the story for those who have read The Man Who Sold the Moon, but it is a fairly minor piece otherwise. 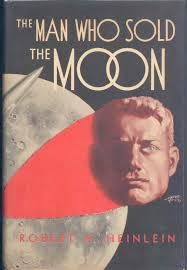 Where this collection picks up is with the novella Tenderfoot in Space. Charlie is a Boy Scout who loves his dog Nixie more than anything in the world. He even works hard to get the pooch some status in his troop.

The story opens as the boy is being questioned by a policeman who knows he is running away because he is unhappy that his family is preparing to leave on a colonization ship to Venus. And the family doesn't have enough money to pay Nixie's passenger fee.

Charlie returns home and, after much family drama, it's agreed that Nixie will be flash frozen, which greatly reduces his chances of surviving the nearly year-long rocket ride to Venus, but it's enough of a plan to satisfy Charlie. Nixie ends up surviving after they resuscitate him on Venus. He thrives there and even gets accepted as an honorary Scout in Charlie's new Earth-like troop.

Heinlein's setting description is exceptionally fictional, as the real Venus is filled with clouds, deserts, and volcanoes. The Venus described in the story contains a blanket of forests that often threaten to swallow up the colony of Earthlings.

Charlie becomes friends with a fellow Scout who was born on Venus and knows his way around. Towards the end of the story, the two boys and Nixie get disoriented in the vast forest. Nixie helps them find their way out, and the heroism he is awarded for at the end of the tale goes to show that Charlie's dad had been wrong in being so difficult about agreeing to bring the dog into space in the first place.