Tony Kushner Takes Too Long to Explain His "Guide" 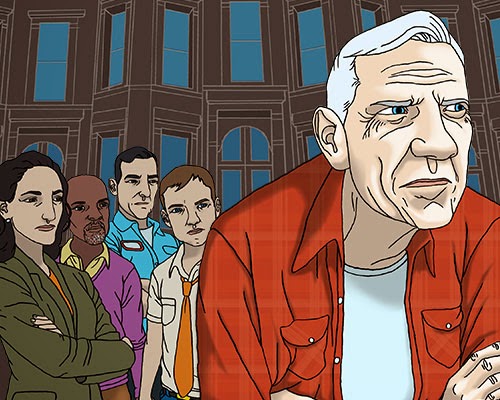 Back in 2003, Tony Kushner's Angels in America TV mini-series probably helped open up dialogue about gay rights to a degree, but its pompousness made it difficult to really love.

The same holds true with his latest, which just wrapped up a run at Theater J in Washington D.C. After the first of three acts in the three-and-half-hour The Intelligent Homosexual's Guide to Capitalism and Socialism With a Key to the Scriptures, the couple next to Rachel, Dan, and I mumbled, "Where do we get our money back?"

I didn't totally agree. In fact, I thought the first act had the most laughs and was the most enjoyable.

The story revolves around patriarch Gus, who is selling the family's New York brownstone, which lures his children home to find that he wants to kill himself (because the world has moved past him?). Tom Wiggin is Gus and he leads a generally excellent cast, including great performances from his kids: the incestous-impregnator Vito (Tim Getman), the triangulating gay Pill (Lou Liberatore), and the worker-rights lawyer Empty (Susan Rome).

The performances were worth remembering, but for the life of me, just two weeks after seeing The Guide, I can't remember what my theory was on why Gus wanted to kill himself. Kushner should use this play to finally realize he doesn't have to take so long to explain any of his epic pet causes.