Rapture, Blister, Burn is the Most Fun I've Had With Feminism

To those who have seen the Roundhouse Theater in Bethesda's current production of Rapture, Blister, Burn, it should be no surprise that writer Gina Gionfriddo has written TV episodes of House of Cards, Cold Case, and Law & Order.

This is one of the snappiest plays around, featuring exceptional comic timing from all five actors, who deliver the most fun I've ever had with feminism. 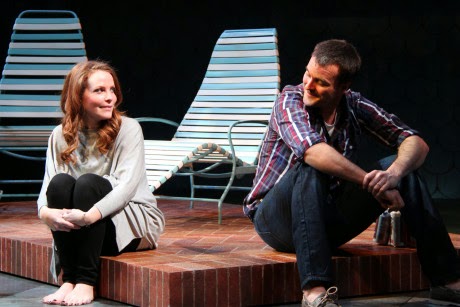 At first, it seems Don, played by Getman with a mix of Homer Simpson and Bill Murray, will surely have an affair with babysitter Avery (Maggie Erwin), but that is not who he has an affair with at all. He gets tossed between his wife and Catherine like a rag doll. This is a nice touch, putting the lone man in the downtrodden and abused position previously and traditionally held by women.

This is a brilliant play, and playwrights would be wise to follow Gionfriddo's style of mixing well-told historical background with deeply explored and empathic fictional characters.