The Warriors: Book Versus Movie


Because The Warriors was released in theaters in 1979, it has always been considered part of a relatively cheesy era (like yacht rock, which was at its peak at the time).

But not only was it famous for knocking Star Wars out of the number-one box-office spot, it was really influential to me when when I first saw it as a freshman at Southern Illinois University. I watched it again and again, both scared of the gang life it depicted and transfixed by the thought of getting to New York City someday.

I think it sparked my love affair with subway systems, as much of the action takes place on late-night platforms and in trains filled with the dregs of society and people with long and unfortunate backstories that we'll never know.

The movie, ranked as my 22nd overall, does a great job of personalizing and humanizing each of the members of The Warriors, a gang framed for the killing of the city's top gangster and has to make it back to their home turf of Coney Island without being picked off in all the enemy territories they have to make it through on the way. 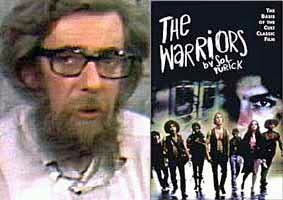 There are many differences between the film and the book that is the basis for the film, which was written by Sol Yurick (pictured) in 1965 and which I just finished reading. Based on the book and film, it appears New York City didn't change much between 1965 and 1979. It was a fascinating, dangerous, and dark place, filled with Times Square prostitutes, unruly and barely-parented street children, and suspicious and violent policemen.

In the book, the title "The Warriors" refers to all the gangs of the city, which are attempting to band together to overthrow all the non-gangsters before the plan quickly turns into chaos. The Coney Island gang is actually named The Dominators in the novel. And they are much less lovable than in the movie, going so far as to brutally rape a girl and viciously murder a mostly innocent passerby.

The book is a great and quick read. The negatives are that I kept waiting for one of the gang members to fall into the subway or meet some of the other endings that the movie gangsters so deliciously met. Some of the scenes are overly long considering that much less often happens in them compared to the unrelenting action of the film. The good news is that if you love the movie, then there are enough differences to make the book well worth reading.