How the Science of Bicycle Ridership Needs to Be Improved 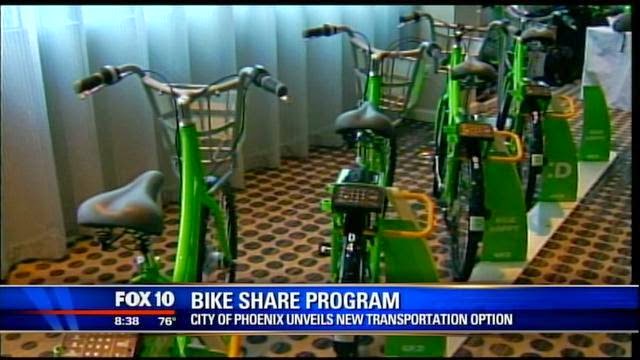 I was quoted extensively in this very-good article by a news service I've never heard of but nevertheless now respect because, I mean, you've got to be good with a name like Cronkite News.

Bike commuting slipped slightly in Valley, but advocates are hopeful

Thursday, April 2, 2015By MIRANDA LEO
Cronkite News
Read more:
Phoenix asking voters to decide $30 billion long-term transit plan
WASHINGTON – When the Census Bureau looked at commuting patterns in the nation’s 50 largest cities, only two showed a decline in the share of people commuting by bicycle – Phoenix and Mesa.
The bureau’s 2014 special report said that over a roughly 10-year period beginning in 2000, bicycle commuters fell from 0.9 percent to 0.7 percent of all commuters in Phoenix and from 1.2 percent to 0.9 percent in Mesa.
Tucson, the only other Arizona city in the top-50 list, saw its share of bike commuters rise from 2.2 to 2.4 percent during the same period, putting it in the top 10 of cities.
The report compared data from the 2000 census with an average of the five-year commuting estimate from the 2008-2012 American Community Survey.
Biking advocates were not overly concerned with the declines in Mesa and Phoenix, noting the small sample size of the survey and pointing out that the Census stopped counting before the launch last year of a bike-sharing system in Phoenix.
That system, Grid Bike Share, has said it plans to expand soon to Mesa and Tempe.
“The bottom line for Phoenix and Mesa is not to take these findings too hard,” Paul Mackie, a spokesman for the Mobility Lab, said in an email.
He noted drawbacks in the data that could have led to an underestimate of the number of people biking to work.
“We simply need better biking and walking data throughout the country to take these kinds of findings more seriously,” he wrote.
The League of American Bicyclists posted its own findings using Census numbers, but it looked at 70 cities instead of 50 and expanded the time frame back to 1990 and one year later, to 2013. Mesa and Phoenix also dropped in the league’s report, but they were among a handful of other cities – most in the South and Southwest – that posted declines.
Ken McLeod, the census data specialist at the League of American Bicyclists, said that could be a factor of suburban sprawl in those regions of the country.
“Most places in the top 70 cities probably have some version of it,” McLeod said of sprawl. “But it’s possible that in Phoenix and Mesa it just happened to create the conditions where they didn’t have a growth (in bike commuting) like all these other cities have seen.”
A report released last week by the Brookings Institution on the “growing distance between people and jobs” in metro areas said that job proximity in the Phoenix-Mesa-Scottsdale area dropped by 16.5 percent from 2000 to 2012.
Mackie cautioned against putting too much stock in the Census numbers, saying the survey wording can pose problems.
“There is one question the Census asks about commuting by bike or foot. It asks, ‘How did this person get to work last week?’ and includes biking and walking as potential answers,” he wrote. “Because work commutes only represent a small portion of all trips, the ACS tells us about a very small fraction of all of the transporting that Americans do.”
Another drawback with the data is that respondents can only chose one form of transportation that they used over the past week, even if they regularly combine biking with transit – as many do with the light rail.
“If a respondent walked to a bus stop in the last week, she’ll be counted as a transit-taker but not a walker. If she bicycled on two days and drove on the other three days, she’ll be counted as a driver but not a biker,” Mackie said.
A Census Bureau official conceded that there are shortcomings with the survey.
Brian McKenzie, a sociologist at the bureau, said that while commutes may involve several different types of transportation modes, people taking the survey “are restricted to indicating the single mode used for the longest distance.”
Because bicycling and walking often serve as secondary travel modes that supplement modes such as transit or driving, some commutes that involve bicycling and walking are not reflected as such in the American Community Survey because another mode is used for a longer distance,” McKenzie said through a spokeswoman at the bureau.
McLeod said another factor might be that initial surveys on bicycle commuting may have made the numbers “look better than they are” back when surveys were being taken less frequently.
“There’s often a lot of noise year to year in these estimates because you’re dealing with very relatively small numbers, small sample sizes,” he said.
Mackie looked to the future, noting Grid Bike Share and its plans for expansion.
“What tends to follow when these systems are introduced to cities is better bicycling infrastructure and more people walking as infrastructure becomes designed for people rather than cars,” he wrote. “Bike-share systems themselves become great advertisements for biking.”
Posted by Pop Culture Lunch Box at 11:26 AM