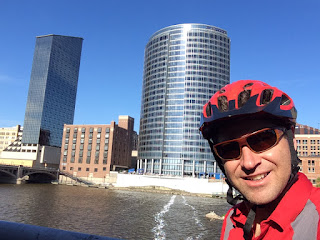 I flew in late Sunday night for a quick few days in Grand Rapids, Michigan at the Center for Transportation Excellence conference on how to do better outreach for transit policy.

My presentation on "Telling Better Stories About Public Transportation" went well and I got lots of nice compliments and thanks for suggesting ways for the industry to improve in this area.

I didn't get much free time, but I was able to tour the city by bike for $15 for a couple hours, thanks to the Central District Cyclery.

I took a nice, easy ride is out of downtown and up Cherry Street to the popular neighborhoods of East Hills and Eastown. Then it was back to south of downtown to The Rapid bus station and across the river around the Gerald Ford Museum. 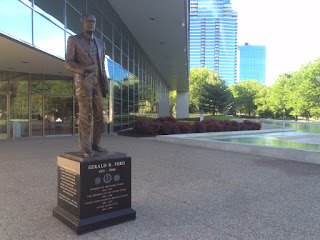 Ford is the most famous person from Grand Rapids (with boxer Floyd Mayweather, Red Hot Chili Pepper Anthony Kiedis, and Al Green ranking not far behind). Signs of Ford are everywhere, from the name of the international airport to the Ford Museum, where he and Betty are buried.

My meal last night was at a place called HopCat (bathroom art pictured) that the respected Beer Advocate calls the third-best beer bar in the world. They had "Crack Fries" and draft Founders beer, which is one of my favorites and is brewed here in this metro area of 1 million people (the country's 52nd-biggest metro area)! In fact, it's the biggest city behind Detroit in Michigan. 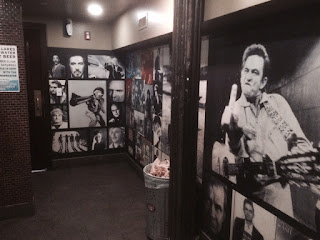 Some other Grand Rapids' facts. The city loves its nicknames. It goes by Beer City USA, Furniture City, and River City, named after the rapid-flowing afore-mentioned Grand River that runs past my Amway Grand Plaza Hotel (dedicated to all the Amway employees of the world!).

The hotel (pictured behind me and my bike helmet) is a grand dame, having once been ranked one of the world's finest hotels. It's massive and confusing and my room is very Mad Men-era feeling.

A few other things to recommend about Grand Rapids: 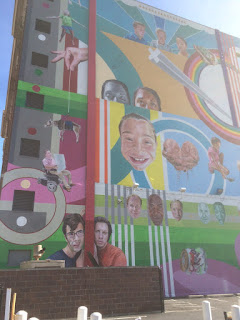 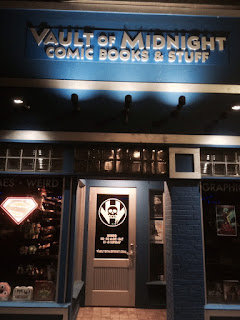