Gravity is Surprisingly Good, Like a Better, Modern 2001: A Space Odyssey 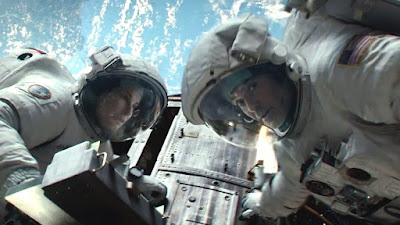 The benefit of having a 103-degree fever this week was that I had the time while lying in bed to watch Gravity, which turned into an unexpected treat.

It's as if 2001: A Space Odyssey all of a sudden had interesting, deep characters in the form of the almost-always-great Sandra Bullock and George Clooney. They get caught up in a debris cloud that results from Russian missile strikes on a satellite and their NASA Explorer mission in space goes horribly wrong.

The film is absolutely captivating. It should have beat American Hustle for best picture of 2013. but at least Alfonso Cuoron claimed best director. (12 Years a Slave maybe should have been them both.)

Going Clear: Scientology and the Prison of Belief and Sinatra: All or Nothing At All are also two HBO documentaries worth watching. The Scientology movie seems like it could have been a little better, but the weird cult-like sect remains riveting as always (**** out of ***** stars). The Sinatra flick is best when it covers the Reprise and Rat Pack years (**** out of ***** stars).
Posted by Pop Culture Lunch Box at 11:33 PM