To Take Back Our Streets, Remember How We Lost Them to Cars

OPTION OPPORTUNITIES
Storytelling and public relations can take back the real story of American streets that was hoodwinked by auto-industry groups long ago.

Children may again someday walk or bike to their schools and their friends’ houses, but to get to that point historian and author Peter Norton says we’ll have to unlearn much of what the auto industry has taught us over the past century.


“Children’s mobility has been neglected. We have seen the future GM and Ford fed us in the 1950s. To change the future, we have to recover versions of the past we have forgotten,” he told an audience this week at George Mason University in Arlington, Virginia.

Norton presented some of the stories from his long-admired book Fighting Traffic: The Dawn of the Motor Age in the American City to illustrate just how brainwashed we’ve become in regards to how we want to design and move through our public spaces.

Peter Norton, author ofFighting Traffic
“People are pretty smart about how to share space optimally,” he said, noting how pedestrians originally became irritated with cars encroaching on their streets in the 1910s.

In that era, the public blamed drivers for all the child pedestrian deaths, whereas now Norton says we would blame the parents. Even as early as the 1920s, the messages began changing to “keep the kiddies off the streets.” Before autos and the notion of speed were common, kids, pedestrians, horses, bicycles, and others jostled through the streets just fine.

And Norton says they did a tremendous job of it. Streets are now thoroughly car-centric, and the idea of people-centered streets remains a difficult concept for most people to grasp. These groups recognized they needed to shift the perceived cause of collisions away from drivers and onto pedestrians. Under the name Motordom, the interest groups were quoted in a 1922 edition of Engineering News-Record that they would lead the effort in a “revision of our concept of what a city street is for.”

A 1937 anti-jaywalking ad from the Federal Art Project. Source: Wikimedia Commons
A major part of this effort was to make walking in the street unacceptable, essentially inventing the idea of “jaywalking.” Centrally coordinated from Detroit, Motordom would enlist Boy Scouts there and in other cities to hand out cards to pedestrians to “quit jaywalking” and would hire jaywalking clowns to look like they were hit by a Model T.

Other parts of the successful effort included producing coloring books for kids, complete with language about how streets were designated for cars, and opening a new program at Harvard: teaching the first generation of traffic engineers to prioritize traffic lights for faster driving and more difficult walking.

Ultimately, Norton uses a Wizard of Oz analogy to describe the public’s perception:

“The Emerald City doesn’t solve Dorothy’s problems. It was a bogus utopia. In the book [but not the movie], it was an illusion created by green glasses that Dorothy had to wear to make the city look like emeralds. It was really made of paper mache or something. ‘There’s no place like home,’ and we have to go back to understanding our multimodal past.”

Decades later, we have never gotten the city of easy parking and effortless thoroughfares that the auto industry and its interest groups have promised us again and again, notably at the 1939 Futurama Exhibit of the World’s Fair (pictured at the top). And, Norton adds, while driverless cars would be spatially efficient, would eliminate the process of parking, and could be shared vehicles, we should be cautious in viewing them as providing a promised utopia.

Norton believes storytelling and public relations are the keys to building a future that more accurately incorporates what we have learned from our past. He said a possible blueprint is to make sure messages like “biking is normal,” “walkability,” and “good transportation choices” become better understood and more widely accepted over the next decade.

Top: Ford Motor’s “Road of Tomorrow” from the 1939 World Fair
Posted by Pop Culture Lunch Box at 10:11 AM No comments:

D.C. Metro Officials Would Be Wise to Encourage Bikeshare Connections to Their Service 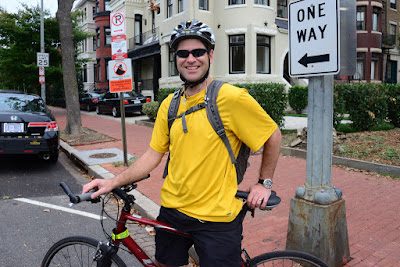 I'm quoted throughout an article published today in The Washingtonian Magazine. It's a good article and highlights how the leaders of D.C.'s Metrorail and Metrobus are struggling to understand how they fit into the fast-changing transportation network of the city. If they think this way about Capital Bikeshare, what must they think about Uber and Lyft?

Here's the full article, and here are a few of my quotes:

Metro Can Blame Bikeshare for Lost Passengers, but Bikeshare Is Just Going to Get Bigger

“You’re going to start seeing Bikeshare in places where Bikeshare stations were too far apart,” says Paul Mackie, the spokesman for Mobility Lab, the Arlington-based transportation think tank. “There are going to be stations every three or four blocks.”

That kind of Bikeshare concentration, along with additional bike infrastructure like marked lanes or protected cycle tracks, could actually put a big dent in Metro’s ridership. But instead of pushing back on bikes, Metro should working with Bikeshare to attract people who might actually rely on both modes of transportation for their commutes.

Deficit or no, though, Bikeshare is not going to back off just because it’ll make things easier for a struggling mass-transit system, and Mackie says Metro discourages Bikeshare membership at its peril.

“For Metro to be discouraging any kinds of trips to its stations is real backward thinking,” he says. “That should be common sense.”
Posted by Pop Culture Lunch Box at 4:04 PM No comments: