Experience and Assimilation Shine Through in Brooklyn 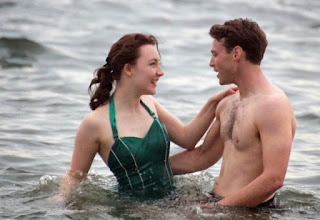 What with two little kids, Rachel and I don't get to go to grown-up movies at the theater as much as we would like.

So it puts my faith back in Hollywood to know that, even with nothing in the theaters that both of us really wanted to see, we randomly picked a movie that both of us liked in the end.

Brooklyn is a BBC film based on a Colm Tóibín novel and adapted by Nick Hornsby (who wrote my 46th-favorite novel of all time).

I can relate, being a descendant of (Scotch/)Irish immigrants. The movie is all about assimilating to a place that is a lot like home only with much more exciting, new, and diverse opportunities abounding.

Saoirse Ronan is exquisite as an average girl named Eilis Lacey from a small, insular Irish town who transforms into a vision of beauty and kindness in Brooklyn. Ronan has been kicking around in movies like The Grand Budapest Hotel ever since she became one of the youngest people to be nominated for a best supporting actress Oscar back in 2007.

Emory Cohen is highly likable as the man she falls in love with in Brooklyn, and the two lay out plans for a promising life in Eilis' new home country.

Brooklyn is a minor movie in many ways. Not a lot happens. But it's little moments, like the immigration advice given by a woman on the boat and the hilarious conversations Eilis has with her fellow new arrivals at their boarding-house dinner table, that paint a much bigger picture of the human need for experience.