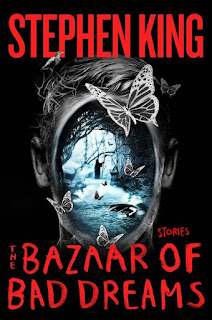 I have a soft spot for Stephen King. Reading his books always take me back to my teen years, when I devoured almost everything he had written up to that point. (See my opinion of his best books.)

His short stories are some of my favorites, so it's exciting to dig into his new The Bazaar of Bad Dreams.

It begins with an old story he conceived at age 19. He wrote it but claims he lost it due to doing too much acid. While recently driving down I-95 in Maine, he remembered the story and rewrote it. "Mile 81" starts with a young kid named Pete who bikes to an abandoned rest area along the interstate. After looking at pictures of nude women hanging on the walls and drinking found vodka, he falls asleep.

What happens within shouting distance during his nap is a horrible chain of events starting with an abandoned, muddy station wagon that lures motorists from the road to the rest stop to help. Bad mistake.

Next we have the Raymond Carver-inspired "Premium Harmony." About halfway through, I realized I had read this in, I believe, The New Yorker many months ago. It's a minor story about a middle-aged couple that argues all the time. She doesn't like him smoking and he doesn't like her eating Twinkies. Then everything changes when she goes into a convenience store to get a purple ball for her niece.

In "Batman and Robin Have an Altercation," no superheroes are involved, Even better: an Alzheimer's patient and a big tattooed Texas roughneck are involved. When a road rage incident gets out-of-hand, the unexpected happens and the police are too late to help. This is a touching story, especially to any grown adults who have had to care for dying parents. And especially if they have done it by regularly taking them from the care facility to Applebee's for lunch.

I was lulled to sleep for a few pages of the short "The Dune," about an old man who paddles out to a small island in Florida frequently. He calls a fellow lawyer to revise his will after seeing disturbing things written in the sand, which he has actually seen in this same spot ever since he was a boy but never told anyone until now. The ending is positively wicked and abruptly makes the story one of Kings's best.

Rounding out the first third of the collection (I'll save the rest for later when my Stephen King withdrawals set in) is probably the best of the batch. Offering a Shawshank-like prison scene and a life-spanning story of one man's battle with a devil who appears in little-boy-with-a-beanie-propeller-hat form, "Bad Little Boy" will almost certainly be opted into a movie or TV show in the future. There are many points that offer spine-tingling chills. And, after all, what more do you want in a King story?

I'll be back with more about this book later.
Posted by Pop Culture Lunch Box at 10:09 PM