Take a look at this two-minute video I appear in and co-produced with Astro Cinema for Mobility Lab.

I think it does a good job of describing "transportation demand management," which is an industry that has often had trouble diving itself and reaps bigger societal rewards than it is often given credit for.

As you watch, you'll no doubt easily understand what these transportation experts are talking about, and you'll be inspired to do a little bit of your own TDM (even if you'll never ever in your life actually say that you're "doing TDM").

Further, the video seems to be doing its job nicely, with about 500 views on YouTube and 400 on Facebook in just its first two days of release. Not bad for a "only" little topic.
Posted by Pop Culture Lunch Box at 1:29 PM 2 comments:

I recently wrote an article on Mobility Lab calling for transit agencies to launch a full-on effort to make commercials for transit that are as enticing as the many excellent car commercials that the auto industry has been pumping out for decades.

As a communications professional, it's often difficult to show exact influence and results of the blogs, videos, tweets, and other materials we create. But when The Rapidian, Grand Rapid's local citizen-run newspaper, published an article this week, Mobility Lab can be proud to see that our advocacy has had a direct success.

Brittany Schlacter leads off her article this way:

“Where are the Super Bowl-esque ads about public transportation? Where are all the transit ads representing freedom to explore and observe, safety, good health, cost savings, sustainability, community, patriotism, and happiness? Transit communications needs to catch up if transit and alternate modes ever hope to catch on.”

At The Rapid, we have embraced Mackie’s challenge. We are launching a new campaign that informs the Greater Grand Rapids region about the merits of public transportation through simple, powerful, consistent and, most importantly, positive messages about the experience.

Transit communications needs to catch up if transit ever hopes to catch on. The Rapid presents a start.
Posted by Pop Culture Lunch Box at 12:03 PM 2 comments:

R2D2-like robots are starting to deliver your mail 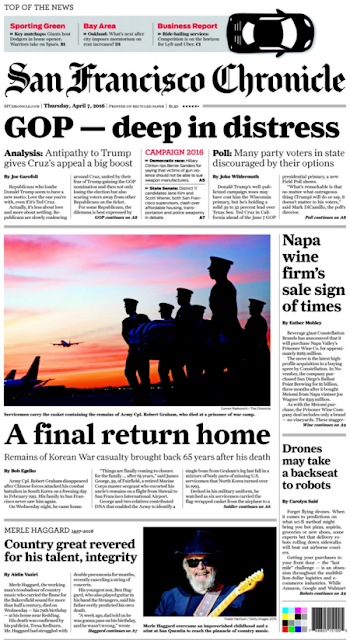 Wouldn't it be nice if service delivery vans and trucks weren't clogging up city streets, parking in bike lanes, and blasting through your neighborhood?

Not that the drivers aren't performing a great service and all. Who doesn't love to get an anticipated package in the mail?

But one way to solve a major source of traffic congestion may just be R2D2. Someone tweeted that the idea of using robots for mail delivery sounds "like a late April Fool's Day joke."

But it's no joke. The robots are on their way. A feature article on this topic appears on the front page of today's San Francisco Chronicle. The full article is here, and, representing Mobility Lab, I get the first and last quotes in the article:


“These R2D2-like drones ... make a lot of sense for particularly dense places, like city centers, where freight and delivery vehicles are simply running out of space on the roads during rush hours and lunchtimes,” said Paul Mackie, a spokesman for the Mobility Lab, which researches advanced transportation options.

“As cities reimagine themselves to become more walkable, livable places, sidewalks have a central role to play,” said Mackie, the transport futurist. “More and more, people are demanding outdoor living rooms like plazas, sidewalk benches, fountains, cafes and street trees. Frankly, these robots fit into such a landscape much better and much more attractively than the delivery vans and trucks of old.” 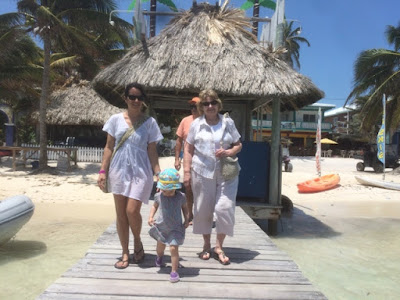 San Pedro, Belize is said to be the island town that inspired Madonna to write the song "La Isla Bonita."

We are staying on "the beautiful island" at Nellie's Paradise Villas next to the Caribbean Ocean in four cozy and fun condos that are surrounded by palm trees, a great and not trashy pool for the kids right in front of our rooms, a fruit stand and much more on the city side, and sunny 80-degree days all around. 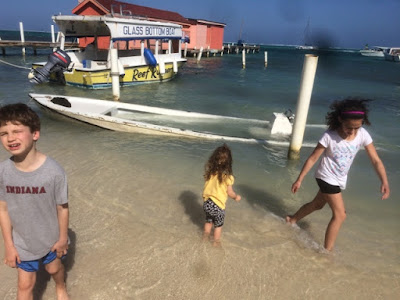 The four kids here are keeping each other occupied and were all easygoing on the long trip here. We woke at 3:45 Saturday morning to catch an American Airlines flight to Charlotte and then Belize City. After waiting in long immigration lines and for quite a while for a taxi (because a bicycle race had supposedly made it difficult for cars to get to the airport), we made it just in time to our boat. This was not a luxury liner. We piled into an enclosed and crowded float that powered us across the sea for a little over an hour to San Pedro. 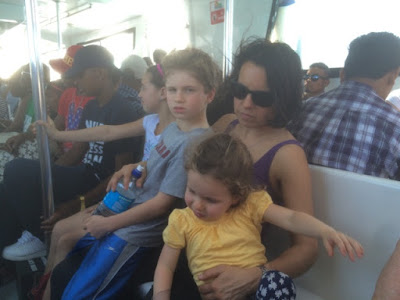 When we arrived, the beach was jammed with Easter Holiday vacationers from all over Belize. There were massive speakers blaring on the beach as crowds pulsed around our luggage carts. I forced my way to our bags, threw them in a golf cart for some Nellie's workers to take for us, and walked along the beach to get to our new home for the week.

From that point on, which by now was about 12 hours from the time we woke up back in Takoma Park, it was all laid back ease. And still relatively early in our day because Belize is Central Standard Time and doesn't recognize daylight savings time, meaning we gained two hours from the East Coast. 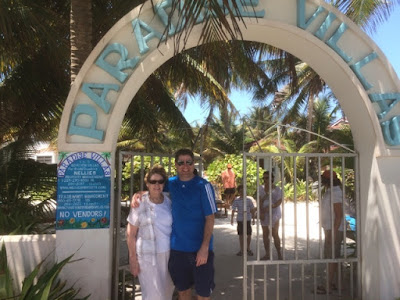 We've been sitting by the pool, walking along the beach, and eating and drinking at the three places right next to Nellie's. Melt has very friendly waiters and a little bar that's nice to pull up a chair to and watch the surf and the American politics on the TV. Palaba is the bar with live music and delicious seafood that can be seen in all the Google Image searches because of its thatched roof at the end of a pier into the blue green waters and tubes to float in with your beers. And The Sandbar turns into a dance club at night where we can get 6-pack buckets of Belikin for $12.50US and where we watched North Carolina roll into the Final Four over Notre Dame (woo hoo). 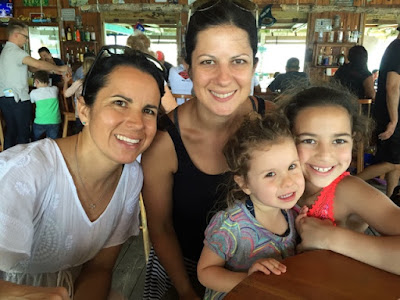 I've had some amazing peel and eat shrimp at Palaba and last night's fancy dinner several blocks away at El Patio hit on all cylinders, included fresh seafood like conch and shrimp in a spicy white coconut curry, mouth-watering ceviche, and ice-cream-like key lime pie.

Now, why am I sitting here eating fresh papaya, pineapple, and tangerines?  The pool awaits. 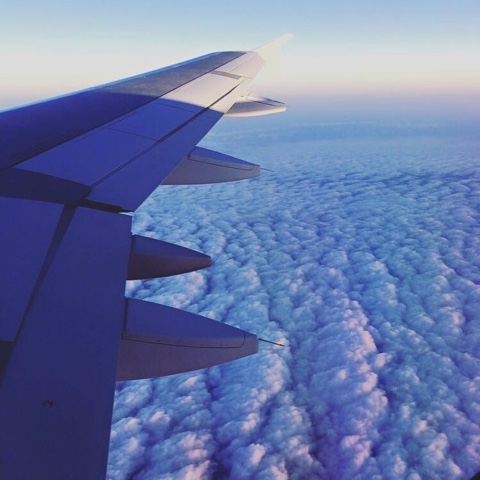