10 Things You Should Know About the Ramones, At Bare Minimum 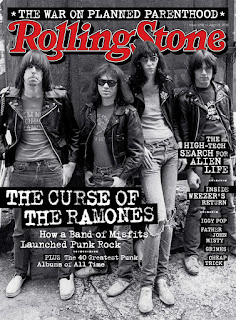 I was never a super huge Ramones fan, although I did play their End of the Century LP pretty routinely as a kid. There's no denying that much of their material sounds very three-chord samey. The good news is that those samey songs are so darn catchy.

Rolling Stone Magazine recently has a cover feature by my favorite contemporary rock biographer, Mikal Gilmore. Here are the most interesting things the article told us about one of New York's finest, up there with the likes of the Velvet Underground, Lou Reed, The Strokes, Television, De La Soul, Gumball, Steely Dan, Kiss, Beastie Boys, Sonic Youth, Public Enemy, Simon and Garfunkel, Madonna, Talking Heads, and Vampire Weekend.