After first test, the Hyperloop still has to convince public it’s a worthy option 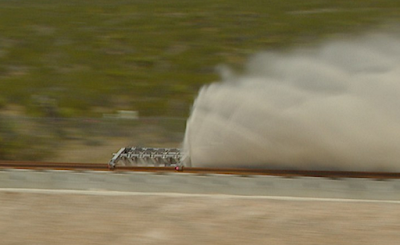 When Mobility Lab and other experts discuss improving transportation connections for people, we often mean within their local areas. A recent test of the Hyperloop, however, suggests we should allocate a bit more time considering how to better connect the entire country.
Think about it, the recent travails of the Metro subway in Washington, D.C., almost seem  idyllic when compared to our options for getting from city to city. Across car travel, Amtrak, and the hassles of flying, a trip from D.C. to New York are all essentially a wash, time-wise.
Footage of the test from CNET.
Enter Elon Musk’s Hyperloop concept. The electromagnetic rail system got a test in the Nevada desert on May 11, marking a first for one of the two firms currently constructing the technology. The system looks to average around 600 miles-an-hour and max out at about 760 mph. If it becomes serviceable, the first line is likely to be Los Angeles to San Francisco. That 383-mile trip would take about 35 minutes, meaning the 226-mile trip from D.C. to New York might run between 20 and 25 minutes.
It sounds like a big improvement, especially if we could connect every city in the country. Businesses and people would flock to the Hyperloop hubs, which could become mass centers of commerce. However, how travelers move outward from those central hubs could be a disaster if primary transit networks aren’t part of the considerations and flexible mass-transit options aren’t lined up.
As entrepreneurs like Musk march toward the science-fiction future that many have imagined for decades, even tougher than creating the technology will be winning the court of public opinion.
Zack Huhn, a startup expert and blogger notes that “every major paradigm shift relating to transportation has been met with great resistance.” He writes:
“The automobile, for example, was disallowed from many city streets because unfamiliar noise startled the horses. When Tesla introduced an effective plan for rolling out electric vehicle infrastructure nationwide, the proposition was ridiculed and essentially disallowed by big auto and oil lobbies. These interests shared an initial lack in public support – including implications such as a lack of public policy influence, and equally as important, a lack of funding or resource allocation from the public and private sectors alike.
“The most important impact from successful Hyperloop testing will be a shift in public opinion not only to become more open to ideas of different and improved means of transportation, but to be more demanding of them.”
We know that people in the U.S. rarely think of adjusting their transportation choices. So could we take the leap from mostly driving in our personal vehicles alone and riding on airplanes right past public transit and Amtrak trains all the way to Hyperloop?
In order for this to happen, public officials and transportation experts will need to focus on:
Meanwhile, the public will concern itself with questions like:
Given the unprecedented speeds involved, safety will be a key point for companies to get ahead of and address, as is the case with many new transportation technologies. Think of bikeshare, which has never had a fatality in the U.S., and driverless cars, which have only had one self-caused crash after millions of miles of testing. Once testing grounds prove safe, as long as riders agree to start boarding, over time people begin to think more rationally about their levels of safety.
NASA Ames research psychologist Lee Stone claims the ride will be comfortable and similar to riding a bus, that Hyperloop passengers can “drink a Coke” while traveling at high speeds. Other experts say that Hyperloop companies are planning to make takeoff and slow-downs similar to airplane acceleration levels.
Musk also seems to have the costs worked out so that the Hyperloop would truly be the best intercity option for all income levels. He has claimed that 840 people per hour could be moved between Los Angeles and San Francisco at a ticket price of $20 per passenger. But, not surprisingly, many experts disagree, and some have said that a more realistic single ticket price would be around $1,000.
The ultimate consumer cost – as with many of the specifics for operation – remains a major unanswered question as the Hyperloop moves toward reality.
Photo, top: Hyperloop One’s sled test decelerating (photo from Hyperloop One).
Posted by Pop Culture Lunch Box at 9:19 AM