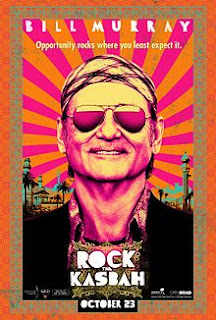 The latest Bill Murray vehicle is directed by Barry Levinson, the Baltimore director of offbeat dramedies like Diner, Good Morning Vietnam, Rain Man, The Natural, Wag the Dog, and now Rock the Kasbah.

A lot like Jon Hamm in Million Dollar Arm (which was OK, but which I failed to review here) going to another country to find a superstar baseball player, Murray goes to Afghanistan as a music agent who finds an amazing singer in a land where singing as a woman can end very badly. Being a Bill-Murray-style wisecracker isn't such a great idea either, but he talks his female singer's way onto the country's version of American Idol. Based on a true story, she becomes the first woman ever on the show and sings English, versions of Cat Stevens's "Wild World" and "Peace Train" that, respectively, stun and captivate the country.

Bruce Willis, Kate Hudson, Zooey Deschanel, and Danny McBride have supporting roles but really don't leave much of an impression. It's Murray who remains captivating throughout, even if he isn't always working with the best material.

And while he's always highly watchable, there are also a smattering of hilarious moments, like when a soldier walks into a room to find Murray tied up wearing a diaper and says, "I ain't never seen anything like this. Murray responds, "Well, it's wartime son." Or when he sings Blind Faith's "Can't Find My Way Home" in the shower, or "Smoke on the Water" in front of unimpressed locals. Or his conversations with his disco-loving, Madonna-obsessed Kabul cab driver.

The critics didn't like Rock the Kasbah, but for anyone who loves Bill Murray like I do, there's really no reason to skip this perfectly enjoyable minor tale.