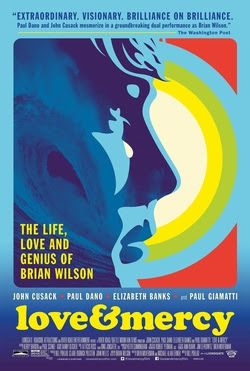 Somehow I've never actually listed my 100 favorite musical acts (could have sworn I had, but a search of this blog turns up zilch). If I had, The Beach Boys would definitely be in my top 10, if not bordering on top 5.

So of course the recent movie Love & Mercy can't do much wrong in my eyes - there's always room for telling more parts of the story of leader Brian Wilson's life.

This one focuses on the eras when Brian was beginning to hear voices in his head, putting together the masterpieces that would be Pet Sounds and Smile and the end of the 80s and early 90s when he was under the prescriptive spell of Dr. Eugene Landy (played as needed, with no trace of likability, by Paul Giamatti).

The movie starts slowly, perhaps overstepping its dramatic aims, literally journeying into Wilson's ear before he buys a Cadillac from Elizabeth Banks's character, Melinda Ledbetter, who goes on to marry Wilson.

But the many scenes with Paul Dano (as a dead ringer for the young Brian) pay amazing attention to detail and are surprisingly excellent considering it's all been told before. John Cusack's scenes playing the older version of Brian are not as plentiful and don't work as well (partly because Cusack's casting is such a stretch); however, that part of the story has been less documented, so it's interesting material.

Some of the best scenes are when Dano directs a magical symphony that would turn into "God Only Knows" and other late-60s classics. Likewise, Cusack falling in love with Banks's character at Griffith Observatory above L.A. is touching, especially seeing how Wilson could still love a little under Giamatti's spell of prescriptions for supposed schizophrenia, under which he stayed in bed for most of three years letting himself deteriorate.

One of my favorite scenes is when the actual Brian Wilson plays my favorite of his solo songs, the titular "Love & Mercy." Beautiful, and heart-wrenching (see the video below), especially knowing the circumstances in which he wrote it.