Don Adams of Get Smart interviewing Janis Joplin in the middle of the documentary Janis: Little Girl Blue is hilarious and a fascinating glimpse at a very different time in American pop history. 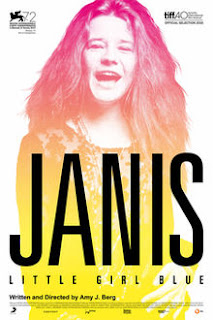 I have never been a huge Joplin fan on album. But this documentary, with Chan Marshall of Cat Power narrating Joplin's letters and words and Alex Gibney who has directed great docs on Enron and Scientology, is the perfect way to enjoy her brand of "emotionally honest" blues rock.

She's mesmerizing to watch, smart, and a good-hearted person who brought the clearly inferior Big Brother and the Holding Company along for a wild ride.

Although she was perfect for her time, it would have been very interesting to see how her popularity could have unfolded in any era, like the 80s or 90s, other than the hippie late 60s.

The main reason I've never put her among the greatest is because too often she would be so drugged out of her mind that her performances were just awful, like at Woodstock, when she was spaced out with her "enabling" girlfriend on too much heroin. As she got nearer to her death at age 27, she became more and more of a caricature of herself.

None of her friends thought Joplin was going to die, but she did one last little heroin blowout and died October 4, 1970, 12 days before I was born. "Me and Bobby McGee," her biggest hit, was released months after her death.

This film biography makes a strong case for how much of a powerful preacher of love she was.
4.5 out of 5 stars