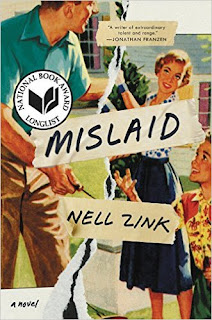 Nell Zink's Mislaid begins as a promising examination of what life might have been like in 1960s to 1980s Virginia, but when the main character and her daughter suddenly decide to become blonde black people, it tailspins into a mess of a second half.

It peters out with no satisfying conclusion, which is a shame, because many vignettes within the thankfully pretty short novel are page turning, intriguing, and laced with smart literary references.

The story starts off in the 1960s at Stillwater College in Centerville, Virginia, where student Meg meets poet teacher Lee. They have a baby and get married and separated several years later. She runs off with their daughter and leaves him with their son. She then changes her daughter's identity from white to black, with not a lot of really clear explanation as to why. Years later they finally meet again through a chance encounter that involves their son's drug bust at the University of Virginia.

Zink gives us very little reason to care about any of the unlikeable characters and there's really nothing profound within the tricks she tries to pull regarding race, sex, and class.

The first chapter of Mislaid appeared in The New Yorker and certainly played a role in getting many people to want to read this one. But really, besides the editors at that magazine, Zink's fanbase mostly consists of Jonathan Franzen, who "discovered" her. I should have known not to read this book based on that information because I really don't want to like (even if I frequently have) Franzen's intellectually stuffed writing either.

My favorite thing about the book, actually, is the excellent mid-century, Archie Andrews/Mad Men-like artwork.