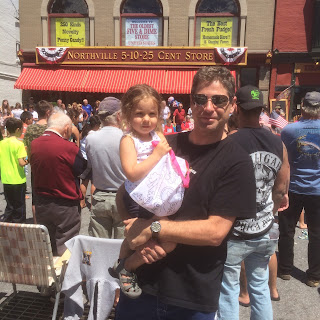 The village of Northville, New York may only have about 1,000 residents, but it knows how to throw a Fourth of July parade.

We took the kids there for the hour-long event today and the streets brimmed with people enjoying the height of Americana, with marching bands, bagpipes, muscle cars, fire trucks, and more from throughout the Sacandaga region of the souther Adirondacks.

Northville was once a high hill, but when the valley was flooded for the Sacandaga Reservoir in 1930, the new lake came right up to the village line. Today there were long lines of cars leaving after the parade to cross back across the lake and onto New York Route 30.

It's a really cute little place about 20 minutes north of my wife Rachel's family's lake house near Mayfield. We bought our Adirondack dinning room table set there, and it has a five-and-dime store (pictured) that overflowed with just about everyone from the parade, as streams of children filled the place to get candy and toys from their parents.

Northville even has a pop-culture claim to fame. Although the episode wasn't actually shot there, producers allegedly called town leaders to get factual details of how an X-Files alien abduction could be set in the town, with investigators in the story even finding a UFO at the bottom of Lake Sacandaga.
Posted by Pop Culture Lunch Box at 4:58 PM