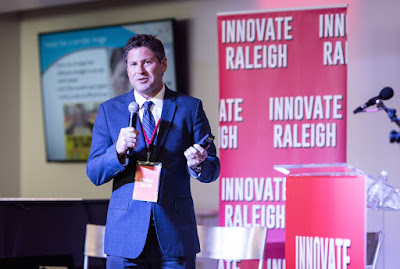 An interview regarding my work with Mobility Lab while waiting for a plane in the Albany airport after our regular summer vacation at Sacandaga in the Adirondacks resulted in some nice coverage from a Pew Charitable Trusts reporter. The article ran in Pew's Stateline publication but was also reprinted by PBS Newshour.

I was asked if carpooling can make a comeback after dropping from its peak in the 1970s of 20 percent of work-commute trips to its current state of around 9 percent. And whether Uber and Lyft can help.

Paul Mackie with Mobility Lab, which advocates for sustainable transportation, said the ride-hailing services have started to change attitudes about carpooling by having gotten people “to get out of the mind frame that you have to drive alone.”

My plane ride was to Raleigh, North Carolina to speak to about 200 entrepreneur types in that bustling state capital. Raleigh Agenda ran an article that quoted me:

Paul Mackie, a longtime journalist and the communications director for transit advocacy nonprofit Mobility Lab in Arlington, Va., led the transportation discussion. Mackie’s overarching message —that a community can easily cut down on the number of cars on its roads without spending billions of dollars—is welcome in a city where commuter congestion only increases.

“We’re a car country. Cars are cool,” Mackie explained. “But while people love cars, they hate driving. And that’s an opportunity.”

In dense areas, transforming parking lots (not building more) into walkable corridors with shops, restaurants, and green space can make an immeasurable change. Improving the messaging around available public transportation options, so they’re seen as efficient and easy to use rather than dangerous and scary, is another approach. And local businesses can encourage their employees to commute to work on foot, by bike, or bus by providing transportation vouchers rather than parking spaces.

Raleigh is poised and overdue for such incremental improvements to its transportation system, as a panel of local and regional experts made clear. A network of buses already connects the city to the rest of the Triangle, and the R-Line works to make downtown feel compact. Dedicated bike lanes are on the rise, and a bike-share program is coming next year.

“It’s such a concise, could-be dense place,” Mackie said. “It’s like a playground to play with, if you’re a city planner.”

And before the event, Raleigh Agenda actually ran an event preview that interviewed me:

“[Government] cannot just do this alone,” says Paul Mackie, communications director for the transit advocacy nonprofit Mobility Lab. “You need collaborators to get the messages out—evidence as to why improving transit options is the right thing to do, stories so people can relate, talking to people face-to-face.”

Emphasizing expanded transit as “the right thing to do” may well be what tips the debate in Raleigh: Cities with more transit options typically have better long-term economic prospects. And removing mobility as a barrier enables people, potentially making for a city with people who are more fulfilled.

Though the conference isn’t designed to address it specifically, the possible success of this fall’s county-wide transit referendum is at stake by having these conversations before November. A “yes” would significantly expand Wake county’s bus system and help craft a long-term vision for commuter rail.

“Inevitably there will be an anti-transit group out there that will have its ducks in a row,” says Mackie. “I have seen it before, where cities just are not prepared to deal with that kind of debate. This is not a country that is easily convinced that transit will work.”