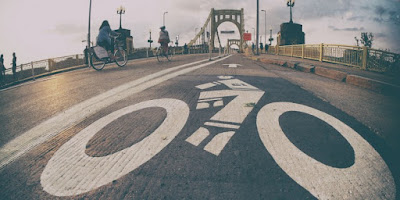 
In my time there, I was lucky enough to represent Mobility Lab and Arlington, Va., in presenting to two groups about how to identify and influence the decision-makers who can get things accomplished, and initiating little things, like pilot projects, that can add up to successfully changing resident’s perceptions.
First, I spoke to students and faculty at Carnegie Mellon University as part of a speaker series hosted by Traffic21, a group focused on transit technologies that is probably as close as Pittsburgh gets to having its own “Mobility Lab.”
Then, I spoke at the 4th Annual Oakland Transportation Fair to transportation experts from throughout southwestern Pennsylvania. The fair, at the University of Pittsburgh, had exhibits featuring fascinating tools and products, free rides in an autonomous vehicle, and was organized by the Oakland Transportation Management Association, which is itself directed by one of the city’s transportation leaders, Mavis Rainey.
Forbes Avenue doesn’t seem to be as dangerous through the Carnegie Mellon campus as it is around the University of Pittsburgh. But it’s encouraging that CMU’s chief campus architect Bob Reppe told me all about the plans for that stretch of roadway. PennDOT is renovating it as acomplete street, with features that recognize the existence of pedestrians and cyclists. Where once there was an underused parking lot, there will soon be a much more attractive welcoming space to the campus, and parking will be placed underground and out of sight.
It won’t happen overnight, but for rebuilding a city that’s better for everyone – drivers included – there is a formidable braintrust in place to keep Pittsburgh heading in the right direction.
Photo: A bike lane on Clemente Bridge, installed in 2015 (David Kent, Flickr, Creative Commons).
Posted by Pop Culture Lunch Box at 11:03 AM