Syria gets a much-needed closer look in Woolly Mammoth's Kiss 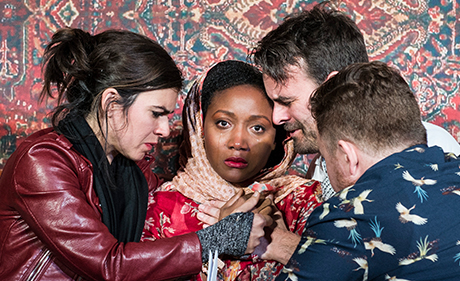 The first thing I loved about Woolly Mammoth's recent production of Kiss was the fact that I didn't read the playbill before watching the show.

That kept me guessing for several minutes in the middle of playwright Guillermo Calderon's play that the actors really were Skyping Syria to find out how life was going for the alleged writer of the play. When the translator left the screen, I caught on, but it made things about as current-event-y as could possibly be.

I feel like the world doesn't know nearly enough about the absolute destruction happening in a place I remember friends and family having told me about enjoying traveling throughout - beautiful plains, deserts, and mountains - in the past. Dictator Bashar Al-Assad has laid waste to the place in just a few short years, and the play does its best to help us understand just how awful life has turned there.

The story begins with a group of fairly average and superficial friends who are in the process of falling out of love with their chosen mates and into love with others in their tight circle. It's a funny and entertaining story, and something the audience would not expect from a night at the theater about Syria.

But then the play breaks and the excellent Gabriela Fernandez-Coffey (as a Faye Dunaway-like soap-opera star) quickly informs the audience that she's the director (she isn't) and the cast Skypes Syria to speak for the "first time" with the writer, who is holed up in a very sad and scary situation. The rest of Kiss brilliantly redoes the play as life very well could actually be in today's Syria. They blaze through the soapy elements with a focus on death and sniping and the all-out destructiveness that we all hear about in the news each day.

We've been so numbed by all the bad news from Damascus and Aleppo and many points in between that we can't even digest how this might be the worst of all wars on the planet right now and at least partially a result of our country's confused and directionless war against terrorism.

Tim Getman, Shannon Dorsey, and Joe Mallon are the other key players in this masterpiece collision of the arts and current events. Let's hope it continues to be performed in places throughout the country and has some effect on the ways we can all help our fellow humans in a place that truly needs it now more than ever.

What the theater should be in the 2010s.