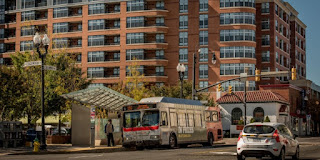 Real-estate developers and property managers have long been coming around to the simple business decision that, if they want to manage profitable projects and attract tenants, they should build and own near transit and other non-driving options.
Just look at Detroit: A 2.5-mile streetcar system expected to launch in a few months to downtown is attracting a goldmine of $3 billion in development, with about 10,000 new housing units. On the other end, commercial real estate in car-dependent areas is proving to be far less valuable over the past decade than city cores or walkable suburbs.
This makes sense. According to Chris Leinberger and Mariela Alfonzo, in a 2012 Brookings Institution study, 90 percent of increased economic performance can be explained by walkability, job density, and workforce education.
For developers in a competitive market, however, just building in these walkable, transit-rich locations is not enough. They, along with property managers, can further improve the attractiveness of their locations by taking distinct steps to ensure that their tenants make full use of those transportation options. These measures have the added benefit of reducing traffic and the improving the quality of life in the surrounding community.
Here are 12 key tactics developers creating projects near transit should consider in order to make their residents, customers, and visitors as happy as possible. The best thing is that these are no-brainer enhancements that are far less costly than the more infrastructure-focused elements of their properties.
Perform tenant surveys to understand people: Particularly if properties have a high resident-turnover rate or difficulty attracting new residents, perhaps it’s time to evaluate what the buildings are missing. On-site brochures and advertising about transportation amenities won’t make much difference if developers don’t understand how to target customers by first understanding their needs and motivations for why they choose to live near transit. A survey that asks residents questions about their commutes or barriers to trying new transportation modes could provide insight and lead to recommendations on ways to improve these amenities. For example, property management company Dittmar surveyed its Dolley Madison Tower residents in Arlington County, Va., to learn about what factors would attract them to a possible shuttle service, among other options.
Learn from past mistakes: Developers are acknowledging that car-oriented office parks are increasingly empty, which is why, for example, First Potomac Realty Trust got rid of more than two dozen suburban industrial buildings and is purchasing multiple properties along Washington, D.C.’s Metro lines, not to mention its bike-friendly streets. First Potomac’s chief executive Robert Milkovich recently noted the writing on the wall: “I’m just continually amazed at how many people are commuting around downtown by bicycle. I don’t think that was the case even five years ago.”
Gently remind people they can bike and walk: The San Francisco Planning Department has an attractive menu of options for its proposed transportation demand management program. Front and center are active-transportation elements that can open people’s minds to biking and walking, especially in the cases of new residents, the most likely to change a long-time habit. Those options include: improving walking conditions, adding bicycle parking and repair amenities, adding a fleet of bicycles, use of bike-valet parking for large events on site, transit and bikeshare memberships and discounts, and installation of showers and lockers.
Think creatively within site-plan mandates from local government: The San Francisco program works by awarding developers a certain number of points for every element they incorporate into their buildings from the draft menu of options. Two of those options might seem unrelated to transportation, but actually are: providing healthy food options in areas identified as being underserved (no longer need to travel to eat) and affordable housing units (fewer low-income people forced to live away from transit).
Get recognized for your work: Arlington County has a checklist of options for properties wishing to be recognized as a bronze, silver, gold, or platinum level member in its Champions program run by Arlington Transportation Partners. Starting with just a handful of participants back in 2013, there are now 221 Champions, a sure sign that a little friendly competition can bring an entire community together to accomplish clear goals.
Set goals: To become a top-level Platinum Champion, employers in Arlington have to “achieve company mode-shift goals within one year.” That is pretty advanced, considering it requires actually having tenant mode-shift goals in the first place, and surveying to follow up.
Offer free money: Developers can lure people to their properties by simply offering the kinds of transit benefits building-wide that individual tenant companies have long offered their employees. Transit passes get people riding.
Display quality information: Some developers understand that boring information bulletin boards in lobbies don’t work for the needs of today’s mobile society. Wayfinding signs aren’t just for roads and highways anymore. Real-time transit-information displays and tailored, hyper-localized transit marketing are crucial to helping residents understand their sometimes overwhelming transportation options.
Provide pooling services: While individual building tenants may not yet be able to afford home-to-work shuttles, such options becomes more possible at the building-wide level. And there are also ways to improve traffic in a building’s neighborhood by offering passes and benefits for UberPOOL, Lyft Line, and other services; subsidies and priority parking for carpools, vanpools, and electric vehicles; and passes for car-sharing fleets like Zipcar and car2go.
Focus on the family: Back in San Francisco’s menu of options, the Planning Department lists incentives for developers who provide cargo bikes and shopping carts, storage for car seats near car-share parking, and on-site childcare services, which help remove the anxiety some parents feel about needing a personal car to make various stops along their daily commutes. 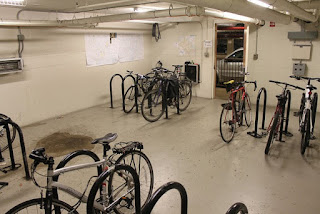 Dedicated, secure bike parking
Forget about parking assumptions: At the top of options Arlington and San Francisco recommend to developers is to reduce, if allowed, the number of parking spaces on site. Some of the best ways to do this – and replace all those empty spots with something more lucrative – include separating the cost of parking from the cost of renting, leasing, or owning; allowing for only hourly or daily parking passes; and giving employees the possibility of “parking cash-out,” the option to receive the cash value of the space rather than the space itself.
Think about how people will get there: Better still, developers should grab a bike, walk around, and take transit lines directly to their buildings from every conceivable direction. Being in other people’s shoes will likely open possibilities that developers may not have envisioned otherwise.
Prepare for future cities: And finally, developers must not forget the dawn of the autonomous vehicle, already testing in places like Pittsburgh and Detroit. Most of these will likely – or at least hopefully, for the sake of traffic sanity – be fleet vehicles shared among groups of people. Much like how individuals should avoid paying too much for a garage in a new home, unless you’re Jay Leno, developers too should avoid going overboard on garages (or build them in smart, convertible ways). When shared autonomous vehicles are roaming the streets, they will, in theory, not need to go into those garages nearly as much. Redfin estimates one-third of urban real estate currently devoted to parking garages could become parks.
There is a lot here for developers to take into account. As people embrace more walking, transit, and other options, and the era of paving over America hopefully trends downward, there will be an awful lot of new real estate for developers to put to better use.
Photos: Top, a Metrobus on Columbia Pike in Arlington County (Sam Kittner for Mobility Lab, www.kittner.com). Middle, a bike parking room at The Nature Conservancy in Arlington (Jon Fisher, Flickr, Creative Commons).
Posted by Pop Culture Lunch Box at 10:18 AM