Baseball, love, and partying in 1980 Texas with Richard Linklater 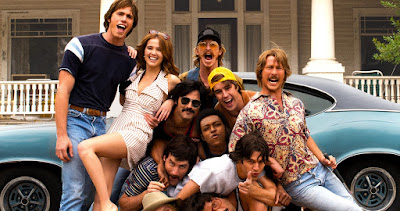 If it weren't for sports, I could have cut the cable cord a long time ago. As it stands, we were able to knock about $60 off our monthly cable/internet/landline bill by taking a baby step.

We still have cable and a DVR on our main TV, but we got rid of them on our second TV and replaced it with a Roku Streaming Stick, which already looks like a perfect option for making that TV our designated spot for Netflix, Amazon Prime, and on-demand movies.

I got to enjoy my first on-demand movie with the new setup by discovering that there are often great weekend deals on new releases. For 98 cents, how could I not rent the great Richard Linklater's followup to his classic Boyhood, Everybody Wants Some!!? Much like his other masterpieces, School of Rock and Dazed and Confused, Linklater excels at glimpsing a small portion of people's lives in order to effectively tell their larger stories, and perhaps those of entire generations and places.

Blake Jenner, who has played bit parts in TV shows like Supergirl and Glee, really shines as protagonist Jake, arriving at a Texas university in 1980 to pitch for the school's high-ranked baseball team. The team lives in a couple of houses on campus that disregard pretty much all of their manager's rules, turning them into Animal Houses.

Glen Powell is one of the many excellent supporting characters. He has an hilarious disco-era way with the ladies as the crew pops around from house party to discotheque to punk concert to classic-rock-philosophizing sessions. Jake also lands an artsy girlfriend, and this whole whirlwind all occurs over a few days before classes start. The movie abruptly and fittingly ends when a couple of the teammates fall asleep as soon as the first class begins.

Linklater is so great because he always offers it just as it was. Everybody Wants Some!! is no different.