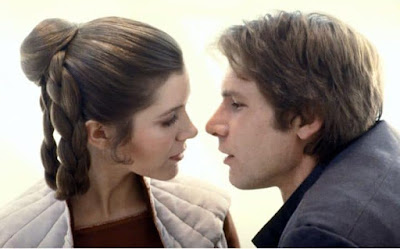 Carrie Fisher's death may just be the biggest of the big 3 celebrity deaths that took place over these holidays (they always die in threes; Watership Down author Richard Adams and Careless Whisperer George Michael were the other two).

Almost as surprising as Fisher's death, which seemed likely after she had a heart attack on a plane from London to L.A., was when we watched The Empire Strikes Back today and I realized I had truly never seen it before! (One benefit of having kids!)

That explains why my recollections of a carbonited Han Solo, Luke's Yoda Jedi training and subsequent losing of his hand by closer-than-he-thought Darth Vader, C3PO's near destruction, and any understanding whatsoever of who Lando Calrissian and Boba Fett have always been completely foggy at best.

Well, most people say Empire is the best Star Wars flick of all, and I might have to agree. The ice battle of Noth in the opening scene isn't my favorite, but the story takes off majestically from there, with the main characters becoming more interesting as they develop further from A New Hope.

The 1980 instant classic was probably made more powerful knowing Fisher is no longer with us. She has always been one of my favorite Star Wars actors, along with Harrison Ford, because of the way she told it like she sees it and was always unedited.