My 40 favorite albums of an impressive 2016, plus odds and sods

If this list doesn't prove what a typically exceptional year it was for music, then I don't know what could. That staple greats like Band of Horses, Wilco, and Parquet Courts got reduced several spots down in the top 10 by upstarts ought to be exhibit A.

Best Compilation: Whether you like The Grateful Dead or not, this expansive collection called Day of the Dead has something for everyone. Also, Say Yes! A Tribute to Elliot Smith, with likes of J Mascis and Juliana Hatfield, offers hard-to-compete great renditions.

Best Soundtrack: Sing Street is way deeper and funnier  that La La Land, and its songs blow them away. That's saying a lot too, because La La Land was pretty good.

Favorite Vinyl Purchase: Pure McCartney is great because I now have four albums worth of great post-Beatles tunes in one semi-quirky boxset.

Best Extras Release: R.E.M.'s 25th anniversary release of Out of Time has tons of great alternate versions of many of the band's most excellent songs.

Best Remaster: The Turtles are a criminally under-appreciated 1960s band, from their Monkees-like hits such as "Happy Together" to their weirdo tendencies fitting for a band that often backed Frank Zappa; "All the Singles" is a loving collection of great songs.

Most Unnecessary Release: The Rolling Stones are back with their first release, "Blue & Lonesome," in eons. And while it's not particularly bad, it is a huge bore and not nearly as good as the great blues records the Stones are trying to emulate.

Best EP: Snail Mail, which I know nothing about, released Habit, which is lo-fi but completely catchy and among the best overall releases of the year.

Biking with Ivanka Trump and Barrack Obama on a cold D.C. morning 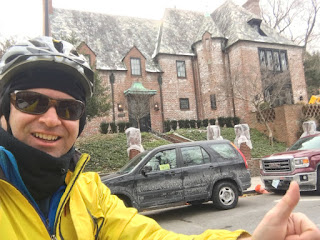 I'm working at a Transportation Techies event tonight, so I took the opportunity for a rare casual, roundabout bike ride to work in frigid 20-degree weather this morning.

My usual route never takes me to Washington D.C.'s Kalorama neighborhood. And, in fact, not many routes to work of mere commoners goes through Kalorama by design. It's a neighborhood of mansions and embassies nestled between Adams Morgan, Dupont Circle, and Georgetown. But none of the streets are all that easy to pass through. So despite being practically smack-dab in the center of D.C.'s action, it has very little traffic.

That might change a little bit soon, as two new neighbors are sure to bring gawkers like me. Barrack Obama and family will soon move in to this lovely red-brick home overlooking Rock Creek Park at 2446 Belmont Road NW. Lots of workers were there getting it ready, as were a few people taking photos like me. 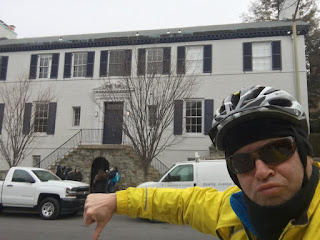 And just a block-and-a-half away, Ivanka Trump and Jared Kushner are moving into this more fortress-like abode at 2449 Tracy Place NW. I imagine the gold-plated interior walls will soon be installed. For now, there was an on-camera interview of some kind happening on the street in front of the house (and just above my thumb's-down sign). 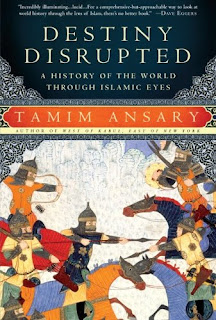 Strange how so many in the U.S. demonize Muslims and Islam. Then again, it's not surprising that we don't much understand that approach to the world, since we are taught very little beyond Western Civilization in school.

That's precisely why it's so important that we all read Tamim Ansary's Destiny Disrupted: A History of the World Through Academic Eyes.

In the book, as noted in past reviews, he tells "the rich story of world history as the Islamic world saw it, from the time of Mohammed to the fall of the Ottoman Empire and beyond. He clarifies why our civilizations grew up oblivious to each other, what happened when they intersected, and how the Islamic world was affected by its slow recognition that Europe - a place it long perceived as primitive and disorganized - had somehow hijacked destiny."


Ansary himself says the book is "like what I’d tell you if we met in a coffeehouse and you said, 'What’s all this about a parallel world history?'"

I'm going to buy this to keep reading, but some snippets from early in the book that show why I love the way Ansary explains things so well include:
Posted by Pop Culture Lunch Box at 3:55 PM No comments: