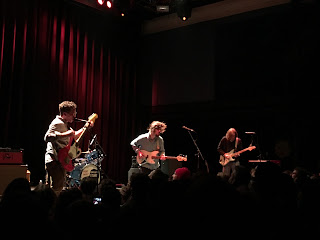 The definite highlight of my week was seeing Parquet Courts at the 9:30 Club in Washington D.C. It was such a rocking show that I think it actually made me sick for much of the latter half of the week.

That's the power of rock 'n' roll, and also presents the sad facts that I must be getting older and it's been way too long since I've been to a concert.

Regardless of how long it's been since I've seen a show, there was no denying how awesome this one was. Also, despite the fact that the Courts didn't play my very favorite song, "Stoned and Starving," it was far from any kind of let down. Here's their set list, and definite highlights were "Human Performance," "Dear Ramona," "Berlin Got Blurry," and "One Man No City," to somehow name a few.

Parquet Courts is my favorite contemporary rock band these days, alongside long-time titleholder Wilco and Foxygen, which I'm seeing next month. Stay tuned on that one. 4.5 out of 5 stars.


And if rock 'n' roll was the theme of the week, then this Archie Andrews thing is fitting right in. I can't get enough of Riverdale on the CW. So I took to the new era of Archie graphic novels as well, reading the final issue of Life with Archie, where he dies in highly dramatic fashion. The first half of the double commemorative issue leads up to Archie being shot at Jughead's restaurant during a fundraiser for political upstart and acclaimed gay Senator Kevin Keller. the storyline also makes us wonder who Archie has been married to for the past several years. Is it Betty or Veronica?. The second half, which I'm still reading, takes place a year later. Also stay tuned. Five out of five star

Despite all his problems in recent years, I still consider Woody Allen pretty rock 'n' roll. Although not among my favorite of his prime-era classics, 1982's A Midsummer Night's Sex Comedy, received a rewatch this week, and it holds up relatively well as a Shakespearean take-off. It didn't make my top 21 Woody Allen films, and it's a little slow by today's movie standards, but it's somehow still 3.5 out of 5 stars.

Another classic I rewatched this week, since my son is now old enough to start watching some key film milestones, was Raiders of the Lost Ark. Little needs to be said about this 5-star flick that came in 17th on my list of all-time favorite movies.

The Age of Innocence, lastly, offered some rock 'n' roll via the classic novel. I still love the 1993 film version with Daniel Day-Lewis and Winona Ryder, but really, how could those actors mess up with a script this juicy? Newland Archer battles his whole life over cousins May and Ellen, in true Betty and Veronica love-triangle fashion. However, the "innocence" of the era's social structure makes it impossible for him to ever end up with his true love. This may sounds rom-com, but oh no, everyone should read this page turner before they die. 5 out of 5 stars.
Posted by Pop Culture Lunch Box at 1:07 AM