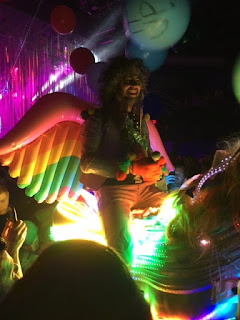 All the Flaming Lips goodwill I have, and considering that the last album of theirs I consider to be one of their five classics came out in the last century, was running pretty thin by the time I walked into the 9:30 Club Sunday night in Washington D.C.

But it didn't take long to bring me back into Wayne Coyne and company's mind meld. As the wacko leader buttered us up with commentary such as how Lips' fans are the best on Earth because we stand there and smile every show. And for all the talk he gave about sadness, he noted that being at one of his shows is one of the best ways to get away from all that for a couple of hours.

As balloons and confetti exploded onto the crowd, so too did the band's music, opening with "Race for the Prize" off of that 1999 classic The Soft Bulletin and "Yoshimi Battles the Pink Robots." Coyne disappeared before fittingly riding a unicorn around the floor of the club for "There Should Be Unicorns," off the new album Oczy Mlodi. That and "How??" both held their own as far as new music during the show. 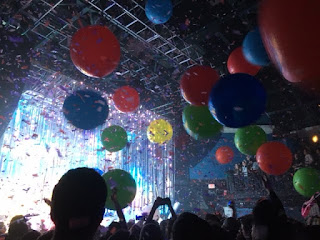 It's ok with me if the Lips feel they are best suited for carrying on David Bowie's legacy, because it really felt like we were seeing Bowie in person for the "Space Oddity" cover (see above video, in which Coyne rides his bubble ball through the crowd).

With a setlist heavy on The Soft Bulletin, Steven Drozd's guitar shone on "Feeling Yourself Disintegrate." And "Pompeii Am Götterdämmerung" from At War With the Mystics was like witnessing Obscured by Clouds-era Pink Floyd. 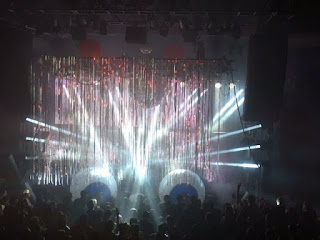 What would have made the concert even better for me would have been for the Lips to delve back further into their catalog than 1999. That said, the final three songs would have been tough to beat even had they done so. "A Spoonful Weighs a Ton" and "Waiting' for a Superman," both from Bulletin, were transcendent. And closer "Do You Realize??" off of 2002's Yoshimi supplied a perfect ray of hope to send the crowd back out into these dark times.