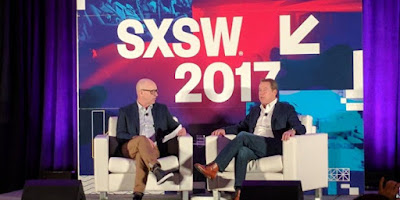 
Anyone who caught Ford’s Super Bowl commercial might have some questions about the other modes – bikeshare and vanpool, most notably – that appeared next to the automaker’s cars. To Ford, it’s part of a strategic, ongoing shift.
Speaking Monday at South By Southwest in Austin, Texas, Executive Chairman Bill Ford Jr., said his company has done one thing really well for the past century – sell cars. But now it’s going to do two things really well – sell cars and provide mobility solutions.
“About 12 years ago, it occurred to me that the way we were doing business wouldn’t hold anymore.” He said many competitors were looking around the world at the potential to sell more cars in developing countries with growing GDPs, but Ford thought that was a terrible growth strategy. “Where are they going to go? You already can’t drive in most urban areas.”
And although it also seems counter-intuitive that Ford would want to make America’s aging transportation systems work better by providing additional options, Ford Jr. alluded to that being a key to the mobility strategy. He didn’t want to discuss the services Ford is going to start offering cities, but he hinted at logistics, fleet management, integrated payments, and autonomous vehicles as areas that make sense. “Watch what we’re doing more than what we’re saying,” he added.
The earliest public parts of what Ford is doing are already starting to take shape. In September, Ford bought shuttle startup Chariot for an eye-popping and a little surprising $65 million. Chariot currently provides 15-seat vans in theBay Area, which run along fixed routes set by rider demand. Ford CEO Mark Fields, recently claimed that, besides offering a complement to transit, each Chariot vehicle likely replaces 20 to 25 vehicles in downtown areas. (Fields, like Ford Jr., has been making the rounds to further publicize the company’s mobility focus.)
This spring, Bay Area Bike Share will become FordGoBike, expanding a shared mobility option that offers another way for more people to get to bus and rail connections.
Surely not all of the experiments under the umbrella of the Ford Smart Mobility division will work. Ford partnered with Bridj, another Chariot-like shuttle, last year in Kansas City, and the year-long pilot program ended in March with few riders. City officials have discussed bringing it back after more fine-tuning.
And Ford is also planning for autonomous vehicles that will work in a fleet-like capacity by 2021.
At SXSW, Ford Jr., said he is confident that the technology for all the ways automobile fleets can complement mass transit have predictable dates to be ready. What he said he can’t predict is when the public will be ready.
Photo: Bill Ford Jr. speaking at SXSW (Twitter.com/exmonkey).
Posted by Pop Culture Lunch Box at 3:24 PM