Fully autonomous vehicles may make us safer, but could add to traffic 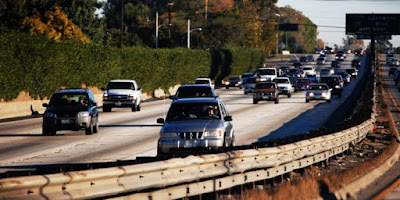 
Just what a future transportation system with autonomous vehicles looks like isn’t completely clear-cut.
However, Kara Kockelman, a University of Texas-based leading academic on the subject, has predictions for their economic impacts. In a South by Southwest presentation last week, she put forth a rapid-fire, yet nuanced, synopsis of the numerous studies she’s completed with UT students on an approaching autonomous future.
“I don’t think these cars are going to help us with congestion. I think they’re going to make it worse,” Kockelman said, adding this this will be an area that will require crucial legislation. “But I think they will save us on safety.”
Safety is certainly a top selling point upon which auto and tech experts will rely as they push autonomous vehicles as a future transportation solution.
The nearly 33,000 U.S. traffic deaths and 6 million crashes in 2014, according to Kockelman, created a cost of more than $500 billion. Driver error caused more than 90 percent of those crashes, and she said AVs would dramatically reduce that number, since at least 40 percent of those deaths resulted from alcohol, drugs, fatigue, and/or distraction.
With 100 percent adoption of AVs, the country would gain $488 billion annually in “pain and suffering” avoided from car crashes. That equates to $1,530 each year per person in the United States.
The congestion side may be a much trickier message for auto and tech experts to pitch to the public. Kockelman calculated that, in 2014, traffic created 7 billion hours of delay and caused $160 billion in economic loss.
On top of that, the bonus of “productivity en route” would be a $645 billion gain to the economy each year.
Add together the two economic gains – pain and suffering plus productivity – and the country would save a whopping $1.4 trillion in costs. On the per capita side, that comes to $4,419 per person in the country.
However, Kockelman balances the positives with the many consequences that would likely domino throughout society, including:

Kockelman and Loftus-Otway presenting at SXSW. Photo by author.
Kockelman continued, saying these side effects could, in turn, increase congestion and infrastructure damage in many places. This would create a need for “systems to be operated more efficiently, equitably, and sustainably, including incentives for ride-sharing and non-motorized travel, route guidance, credit-based congestion pricing, and micro-tolling.”
“We’re going to see a lot more travel, but hopefully we’ll travel together, so that will avoid congestion,” she said. Kockelman added that improved technology should make tolling more efficient and that better public transportation and true ridesharing (as opposed to Uber- and Lyft-like ride-hailing) will be keys along the autonomous path.
Perhaps most importantly, she and her co-presenter Lisa Loftus-Otway, also from UT-Austin, said AVs offer a momentary chance to have a national conversation about transportation in the U.S. – something that has never truly happened on this scale.
“We’ve never really had an honest discussion on what transportation costs us,” Loftus-Otway said. “Terminology matters and [for example, we] shouldn’t call it a gas tax. It’s really a usage fee. Growing up, I never really knew how we paid for transportation. I guess I used to think the road fairy paid for it.”
Hopefully the AVs that appear in the near-term will help people better understand how transportation works. And then again, it may take some deliberate, and creative, outreach to help people understand the issue.
“Hopefully you all have been inside [an autonomous vehicle],” Kockelman told the audience, before laughing, “I have … and it’s pretty boring.”
Photo: Busy freeway (Rafael Castillo, Flickr, Creative Commons).
Posted by Pop Culture Lunch Box at 3:32 PM