Best Magazine Reads: GQ nails why Federer is awesome, but not my favorite tennis player 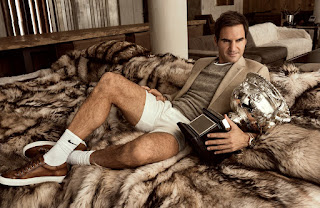 Over the years, I've come to appreciate Roger Federer's steely perfection, his Switzerland-ness, if you will.

But he's still not my favorite player.

He's awesome to behold, but in reality, you always know you're going to get the exact same forehands, the perfect one-hand backhand, the same serve percentage, and the same extraordinary-human courteous post-match interviews.

So GQ's April cover story on Federer summed it up for me:


Friends of mine, hitting partners, are Federer fans for real. They own his racket, his sneakers, the hat with his RF logo. When he loses, they're wrecked; when he wins, it's only slightly less painful, because it's one fewer win they get to witness. Federer fans admire not only the game but the gestalt, what he represents. Integrity. Class. Flawlessness on and off the court. Whereas my problem's always been with that same idea of perfection, the absence of blemishes. As a fan, I need some grit to grab. More for me are Andy Murray's self-defeatism, Stan Wawrinka's sourness, Nadal's nervous mannerisms. Basically, men who are capable of tragic mistakes, who demonstrate, physically and noisily, what it takes to beat back their own worst tendencies—or, just as often, fail in trying. And then there's a side of my vanity—and I'm not proud to say this here—that's occasionally thought that being a Federer fan is just too easy.

What is Roger Federer? Roger Federer: is Swiss. Very normal, laughs a lot. On some level he's a product of the '90s—he used to have bleached hair, he had posters in his bedroom of Shaq, Michael Jordan, Stefan Edberg, Boris Becker. (Also Pamela Anderson. “I remember that one,” he said, chuckling. “She was on my door.”) He's polite, he's fastidious. He's a family man who loves movies. In private he's goofy, earnest about his interests, and he seriously doesn't mind getting excited when he tells a story. Basically, Roger Federer is kind of a dork, in the very best sense.

“You don't want to give anything away to your opponent. I used to do that all the time when I was little. Throwing rackets, shouting, all that stuff. You give an edge to your opponent if you do that. Eventually, you develop your demeanor. Rafa has his tics. Stan has his look. I have my look. You become this shield.”

It's a good, quick read beyond that. And that photo of those hairy-man legs is almost downright shocking.
Posted by Pop Culture Lunch Box at 11:14 AM