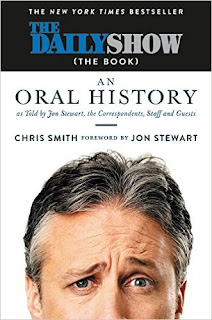 Is it any coincidence that soon after The Daily Show with Jon Stewart went off the air, "fake news" becomes a buzzword?

I really miss his best-ever regular takes on politics and the media. To me, his former correspondent Samantha Bee is the best of what remains in his aftermath. But she's only on TV once a week.

Of course, now President Donald Trump sets the news every day with his early-morning tweets. With his endlessly fascinating and constantly out-of-left-field opinions, one could argue there's an amazing new comedian taking Stewart's place. But really, the next-best thing to Stewart is this new book, The Daily Show (The Book).

I have only just begun reading it, but here are four interesting nuggets to whet your whistle: