Announcing the debut of Wiener Sausage: The Podcast!

Should delivery robots be allowed on sidewalks? 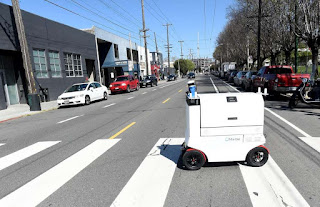 San Francisco, of all places, is considering such a ban. While better city planning in most places is needed to examine the best ways these R2D2s can be helpful and not a nuisance, they also could be an answer to the growing army of Amazon and UPS and other bigger delivery vehicles that more and more constantly block my bicycle path and can make traffic jams much worse.

Here's what I said:

“The space-saving R2D2s could fix a lot of our traffic headaches caused by the ever-growing number of delivery vans and trucks that have to park illegally and dangerously to make their dropoffs,” he said in an email. “It doesn’t make any sense for San Francisco leaders to be going backwards like this.”