I always wanted to be a professor, so here's maybe the next best thing 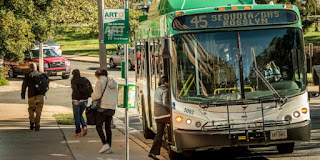 I served as an advisor (and even got to teach one class) for a project by George Mason University graduate students this spring semester.

It was really fun and, as a bonus, the report the students wrote is very good. Check it out here, read a Mobility Lab-published article I wrote about it here, and take a look at an article today on GMU.edu. My quotes include:


With deliveries expected to increase by nearly 30 percent in the next decade, it is an area that needs more consideration, said Paul Mackie, communications director for Mobility Lab.

As Arlington County officials ponder the proposals, Jonathan Gifford, director of Mason’s Center for Transportation Public-Private Partnership Policy at Mason’s Schar School of Policy and Government, said Mobility Lab “was highly enthusiastic about the results. … While Arlington is widely recognized as a leader in multimodal mobility, there are clearly opportunities to do even more.”

“The Mason recommendations are very practical and should be useful to Arlington, which is already pretty well-connected because of its many transportation options,” Mackie said.

Is that sausage The Fat Boy is making?

0:00 - A word from our sponsor, Wendy's. "Where's the Beef?"
0:45 - We introduce our interview guest for the show, Peter Sullivan, Dan Sullivan's dad and  backer/spiritual guru for Wiener Sausage: The Musical! Everyone agrees that we're exhausted because none of us went to bed early the night before and neither the hosts nor the guest are morning people.
3:00 - We learn that, in the Wiener era, Peter was watching his children become "responsible citizens."
5:30 - As we've entered into Trump's unreal world of reality, we discuss how war and sex has transformed in the decade since the musical was produced in Washington D.C. It's interesting to see the Russian cold war kicking back into full gear.
8:15 - Peter reflects on how many of the wars throughout history have been over resources, and that "renewables" was a forward-thinking theme within Wiener Sausage's plotline since wind and  have begun to play a major role as energy sources. Dan establishes that co-host Paul Mackie is "an environmentalist."
12:30 - In the last episode, we talked all about Star Wars. This is a nice segue to a conversation with Peter about the "Star Wars" missile-defense system he worked on under the Reagan administration. He worked on policy issues and was in no way a mad scientist like our lead evil character in Wiener Sausage, Professor Dr. Schmock.
​17:30 - The good new: "The Fat Boy" in North Korea's missiles are still "lower-threat" missile systems and we and the Israelis can be pretty successful at this point in stemming any attacks.
19:30 - The other good news: We probably have never truly developed a doomsday device to destroy the world!
20:40 - Fun fact! Russia can't get Alcoholic Anonymous to work.
24:00 - Dan eloquently waxes on how the writing of our musical was the result of the new dangers felt throughout the country in the wake of the 9/11 years. We dealt with this national struggle with comedy.
27:00 - Peter, in true guru form, says, "The best things in life are a good laugh and a good physic." Look that one up! Aaaaaaaaand this episode returns from its deep political discussion to its scatological roots.
30:00 - Or perhaps politics and sausage are exactly what this show is about. We're still figuring it out, but Peter does an excellent job at helping summarize and lead us into whatever that future may be.
34:00 - Paul and Dan struggle to figure out a great way to "take us out."
Posted by Pop Culture Lunch Box at 2:19 AM No comments:

(These are show notes from my short-lived and perhaps ill-fated podcast with Dan Sullivan. May it always at least live on here. Sigh.)
The latest episode of Wiener Sausage: The Podcast! is now upon us. This is how it unfolds:
1:00 - A hot heatwave overtakes the early-Sunday-morning minds of our co-hosts Dan Sullivan and Paul Mackie.
2:00 - Nevertheless, the high standards of podcast recording are not compromised. And somehow our hosts connect the Wiener Sausage Theorem with the algorithms of Garageband.
3:30 - The topic of discussion for this episode is Stars Wars stuff. Also, can Star Wars and Wiener Sausage fans be aligned? Considering the fact that Dan and Paul once walked out midway through a Star Wars movie, perhaps not. But granted, they did walk out at the line, "Hold me like you held me on the plains of Naboo."

The plains of Naboo
6:35 - Stars Wars is in the news these days, even though there is no brand new movie being released. Sillof is an artist who is modifying Star Wars action figures to be sort of half Star Wars/half whatever the characters were influenced by. Weird, but cool and interesting. Perhaps Dan can collect them since his parents wouldn't allow him to collect the original figures (WTF?).
10:00 - Also in Star Wars news, Rancho Obi-Wan in Northern California is seeing thefts of its memorabilia, and it turns out it's the owner's friend who is stealing the goods, such as a Boba Fett action figure. Dan becomes very concerned about catching the thief, Carl Edward Cunningham.
12:30 - A message from  that may or may not be one of the show's sponsors: Kiva Maqui Berry Powder. Dan and Paul are unsure what the product is, but it may be snortable and/or a supplement.
17:00 - A break at the end of part 1 of this episode prepares listeners for an interview in part 2 with , a key backer of Wiener Sausage: The Musical! back in 2008.
Posted by Pop Culture Lunch Box at 1:36 AM 2 comments:

Yes, we made it back for a second episode.

​These things can never be taken for granted. But again, we think we're finding our groove ... with the help of another excellent guest, Sean Felix, who was a star of the 2008 D.C. production of our Wiener Sausage: the Musical!

3:00 - Dan and Paul discuss who the audience for this podcast might be. The decision: it will help listeners escape reality, much like how dingy taverns helped us do so back when we were in our 20s. Also touched upon: does drinking alcohol help or hurt creativity? The science seems to still be out. But one thing is sure, it's a lot harder to howl at the moon without alcohol!

​7:00 - A word from our sponsor, June Weenie's Self Defense Academy, leads us into a special reading of a never-before-heard extra scene from Wiener Sausage: The Musical!, read by Dan, Paul, and guest Sean. Continuing the tradition, as reviewed by the Washington Post, as "tasteless yet popular." Your job as the listener? Relax, and learn.

12:30 - A word from another one of our sponsors: Prana Bridger jeans. The perfect pants for Kevin Costner.

16:00 - Introducing Sean Felix, who played a character whose name neither one of the playwrights seem to remember. We think; however, that it was Professor Dr. Ewing/Uwe Schmock. Sean reveals that he was drifting around in life until the role came about and he found more purpose.

21:30 - Sean describes what Wiener Sausage: The Musical! is all about, in under a minute. And what does the musical have to do with what we're now trying to do with this podcast/radio show? The musical was insane and so were the times, politically and socially. Nothing much has changed, so this podcast may just be very right for the times.

26:45 - Sean is now a teacher with a family in Hyattsville, Maryland. He reads lots of comic books, and among his favorites is Black Hammer, plus a book called Countdown that is great for teaching kids about the Cold War.