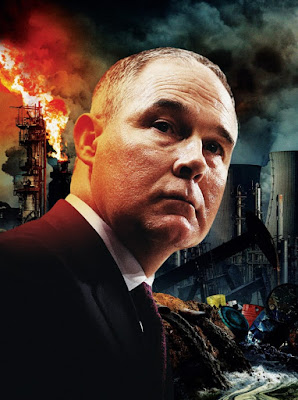 There is a lot of incompetence in Donal Trumpland these days, but perhaps nobody should boil the blood of voters more than his EPA appointee.

Rolling Stone's Jeff Goodell profiled all his flat-out wicked deeds in Scott Pruitt's Crimes Against Nature, in its August 10 issue. It seems people wouldn't have to be classified as liberals or environmentalists to be terrified of this person's disregard for the EPA's core mission of "protecting human health and the environment," which has nothing to do with supposedly boosting the economy.

Here are 10 interesting nuggets from the article:


Note to self, don't move to Oklahoma. And also maybe consider moving to Canada, where climate change won't be as harsh and as soon as it's set to be here at home.
Posted by Pop Culture Lunch Box at 10:54 AM