Glen Campbell was always in the background, he's worth rediscovering 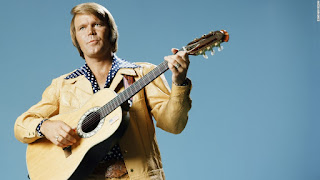 There are just some artists from my childhood that seemed really great back then. They faded away for years as I migrated to much "cooler" bands from genres like metal, indie rock, and hip-hop. But they've rushed back from time to time in my adulthood to various degrees of rediscovery.

Sonny and Cher, Donnie and Marie, the Jackson 5, the Archies, to name a few. And there was Glen Campbell. His country-pop music was so good. He even became cool over the years, so cool that in 2011 he covered "Hold On Hope," a classic song by my second-favorite band of all time, Guided By Voices.

Those songs from the last decade of his life are just heartbreaking. I defy anyone listen to "I'm Not Gonna Miss You," an ode to his wife, and not get choked up.

His classic songs are too many to rank in any kind of order. But any greatest hits collection would have to feature classics like "Wichita Lineman," "By the Time I Get to Phoenix," "Gentle on My Mind," "Galveston," and "Rhinestone Cowboy," which I love to play on guitar.

Glen Campbell died today in Nashville, after a life filled with battles, mostly alcohol- and drug-related. But his last battle was the one he couldn't beat - Alzheimer's. He was 81, and he left enough music for all of us to keep discovering for many more years.

A few notable nuggets about him include:
Also check out my review from last year of the CNN special (4 out of 5 stars) about Campbell, called I'll Be Me.
Posted by Pop Culture Lunch Box at 11:30 PM