How did they get the idea for Amazon's Red Oaks? 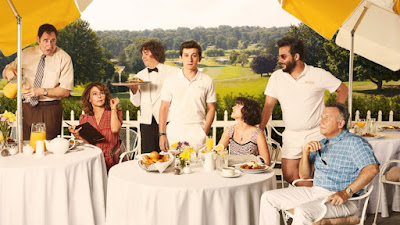 Throughout the first two seasons of Red Oaks, on Amazon Prime, I was sure that the only inspiration could've been the classic Caddyshack.

But as this interview with one of the show's co-creators makes clear, it was actually his time spent working at several New Jersey country clubs that proved the impetus.

Craig Roberts plays the protagonist David, who is working for the summer as an assistant tennis pro at a country club. He is adorably likable and gives viewers reason to return each episode. He's also a British actor, which I didn't know until after watching all of the first two seasons.


Every story line is great and so are all the characters.

Jennifer Grey is a blast from her Patrick Swayze-matched 80s past along with Richard Kind as David's sympathetic and pretty sad parents.

Ennis Esmer hilariously plays the lead tennis pro Nash and is the older, arrested-development stud who hangs out with kids that we all seemed to know at one time.

Josh Meyers is similar as Barry, but is a painfully self-absorbed Miami Vice type.

Oliver Cooper's Wheeler and Alexandra Turshen's Misty have one of my favorite storylines as the odd couple.

Then there's the whole rich Getty family, not terribly likable but also fascinating as a way to see how the other half lives: Paul Reiser, Gina Gershon, and the Ally Sheedy-like Alexandra Socha.