How does The Babadook compare to my favorite horror movies of all time? 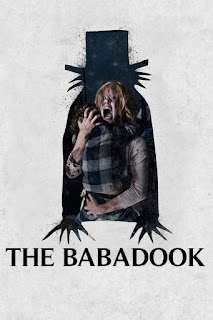 Many rankings of the best horror films have 2014's The Babadook, which I finally just saw, as one of the best ever. While I don't rank it anywhere near my personal top 10 within the genre, it does feel like there haven't been many scare-fests in recent years that match its levels of psychological thrill.

Its a tale of a woman who lost her husband in a car crash as he drove her to the hospital to have their baby. Seven years later, she takes care of "the boy" (which you don't want to call him) but secretly can't stand him. Lack of sleep, misbehavior at school and on the playground, and social pressures from girlfriends leads to a psychological and murderous mind bend for the mom. And all it takes is a strange child's book character to set off a terrifying, but only mildly bloody, chain of events.

The Babadook doesn't match the horror movies that made the list of my 90 favorite movies of all time, which included:
I think other ones not in my top 90 that might fall in ahead of The Babadook include:

For more ideas of what to watch, check out the great horror choices on this list.

And next I must see this year's Get Out, which Rotten Tomatoes jaw-droppingly rates as the top horror flick of all time.
Posted by Pop Culture Lunch Box at 11:07 PM