Musical Find of the Day: Alex Cameron, for fans of Foxygen-like weirdness 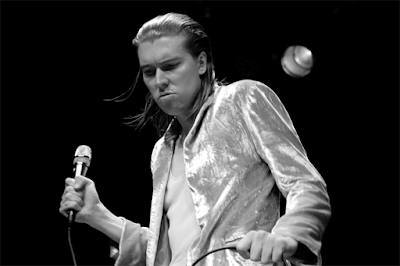 I was intrigued by Alex Cameron because his upcoming album, Forced Witness, is co-produced by one of my favorite new musicians, Foxygen’s Jonathan Rado.

And Cameron has the same amount of weirdo, quirkiness as Foxygen, which I saw in concert earlier this year and can confirm the weirdness. The two artists specialize in awkward dance moves that it is very difficult to stop watching.


To kick it up a level, Cameron released the first video for his upcoming release (see YouTube, the dude likes videos) and it features beautiful backing vocals from Angel Olsen and the afore-mentioned awkward dance moves by none other than Jemima Kirk from HBO's Girls (who also directs the video).

I'm not that sold yet on Cameron's older music, but I want to hear more. He sometimes sounds kind of like Meatloaf smushed into Depeche Mode, which isn't very enticing, but, perhaps because of the presence of Foxygen and these other contributing artists, as well as some clearly exceptional character-driven songwriting, there's an opportunity for this song and all of Cameron's work to be a slow grower.

And those dance moves!
Posted by Pop Culture Lunch Box at 4:42 PM