Sharknado makes us ask if we're even still afraid of sharks

I recently spent a lazy rainy day at the Lake of Ozarks skipping out on a boat ride in exchange for a triple header of Shark Week movies on the Syfy Channel, the only one of which whose name I remember was Trailer Park Shark.

I guess it just goes to show that I, like many others, will watch anything that includes great whites. There's no telling whether that hillbilly jam was better or worse than the grand dame of the new breed of shark movies, 2013's Sharknado. 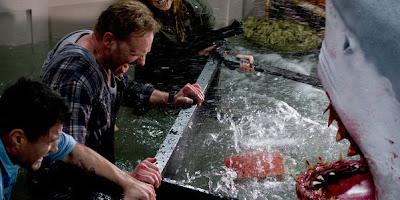 I finally got around to seeing that alleged classic last night and, despite an obvious decrease in brain cells reported in my head today, the movie is an indelible must-watch for fans of the 90s classic TV show Beverly Hills 90210. Ian Ziering, aka Steve Sanders in Bev 9er, finally found the one role he was always meant to play, as Fin, the surfer dude whose beach bar is destroyed by waves of sharks. He then goes about crossing Los Angeles to drop bombs on tornados and vanquish the flying sharks with his chainsaw.

Really, does any more need to be said?

3 out of 5 stars. Now I have, what, four more Sharknado movies to catch up on?
Posted by Pop Culture Lunch Box at 11:32 PM