Tennis has been one of my lifelong passions.

But there have been few tennis movies that have come close to matching the drama of McEnroe vs. Borg or Nadal vs. Federer or, heck, even Gustavo Kuerten vs. Sergi Bruguera.

I mean, how can you match the beauty and story of the likes of the above short on Guga's first French Open win or those of my other favorite men's players of all time (ranked):

This week, Hollywood nearly reached the higher plane of actual tennis, when we caught Battle of the Sexes at E Street Cinema in Washington, D.C. As an interesting side note, we happened into free tickets because the Secret Service wanted to move us along in line so we wouldn't disturb the entrance of Mike Pence and Josh Brolin attending the premiere of Only the Brave. 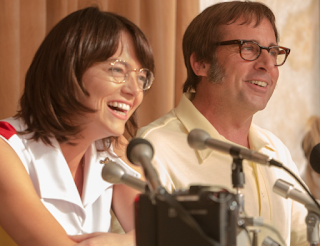 I have to admit that Billie Jean King always got on my nerves, but when she was playing, I was far too young to understand the cultural significance of her off-court actions. She never seemed to be that exciting when I watched her play against the likes of Martina Navratilova and Chris Evert.

But I was too young to have known about the match between King and Bobby Riggs, played in the movie with lovable squirm-ability by the incapable-of-not-being-funny Steve Carell. And Emma Stone made me forget any of my biases against King, as she plays her with determined vulnerability.

This movie, like Hidden Figures and other recent historical dramas, should be enjoyable for just about anyone, whether you're interested in the actual subject matter or not.

For me, it's an added bonus that I have that tennis obsession. Now if only I could find the time to get back out on the court to win a few more competitive championships in TennisDC.