With most of the LACoMotion conference I was attending in the books, I started my Saturday night walk down the length of the Sunset Strip by getting dropped off in my Lyft at the Roxy, starting on pretty much the far west end of West Hollywood. The place is famous for many things (including the wacky Will Ferrell comedy Night at the Roxy), but mostly for giving Pee Wee Herman his start, serving as the home base of John Lennon's "lost weekend" of the early 1970s, and being madam Heidi Fleiss's hangout in the 1980s. 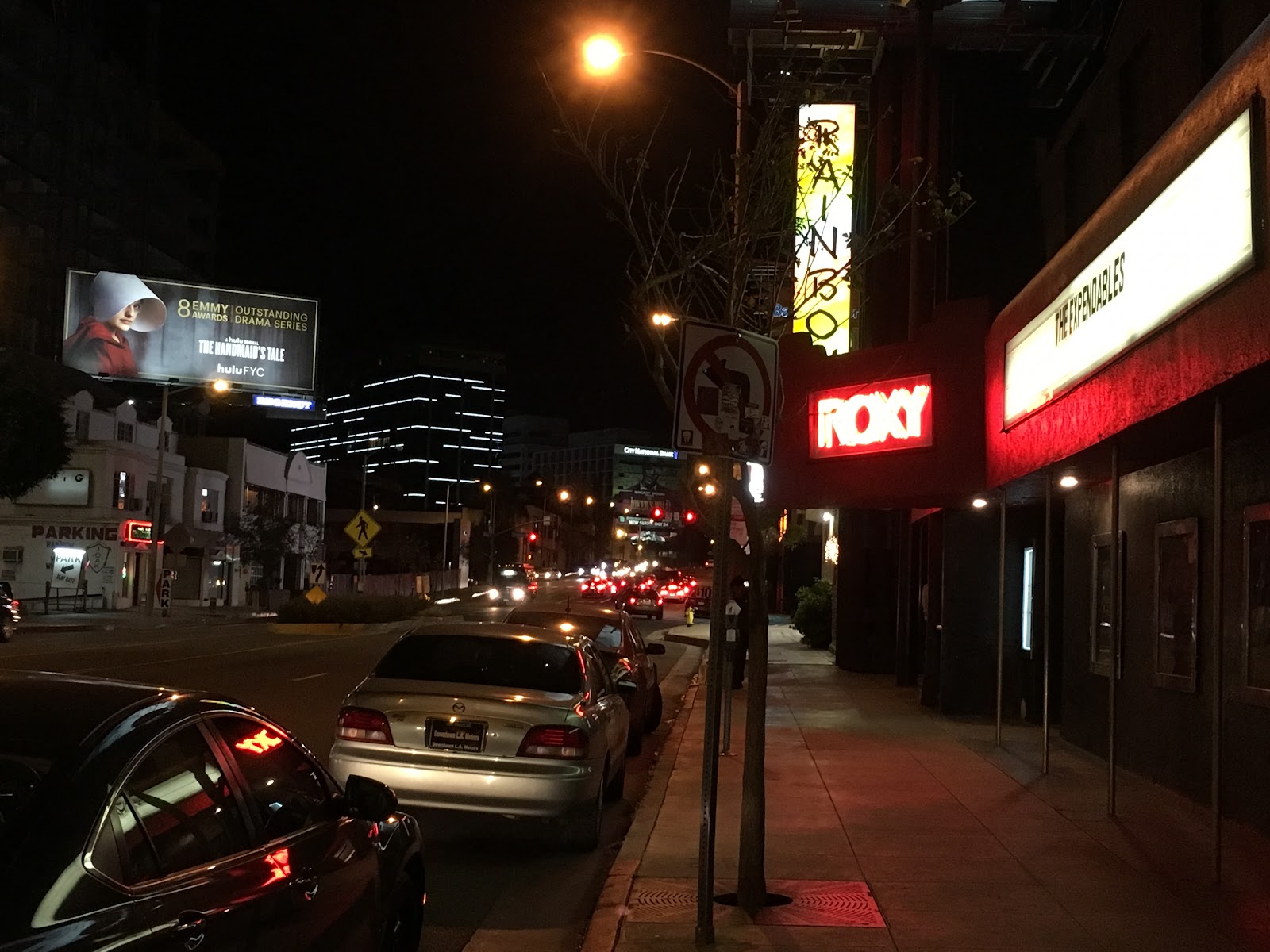 I had planned to take public transportation but it was just going to be too long on the bus, so I endured the infamous Los Angeles traffic, exemplified most by this kind of excess (fast cars and Hustler mega-shop). 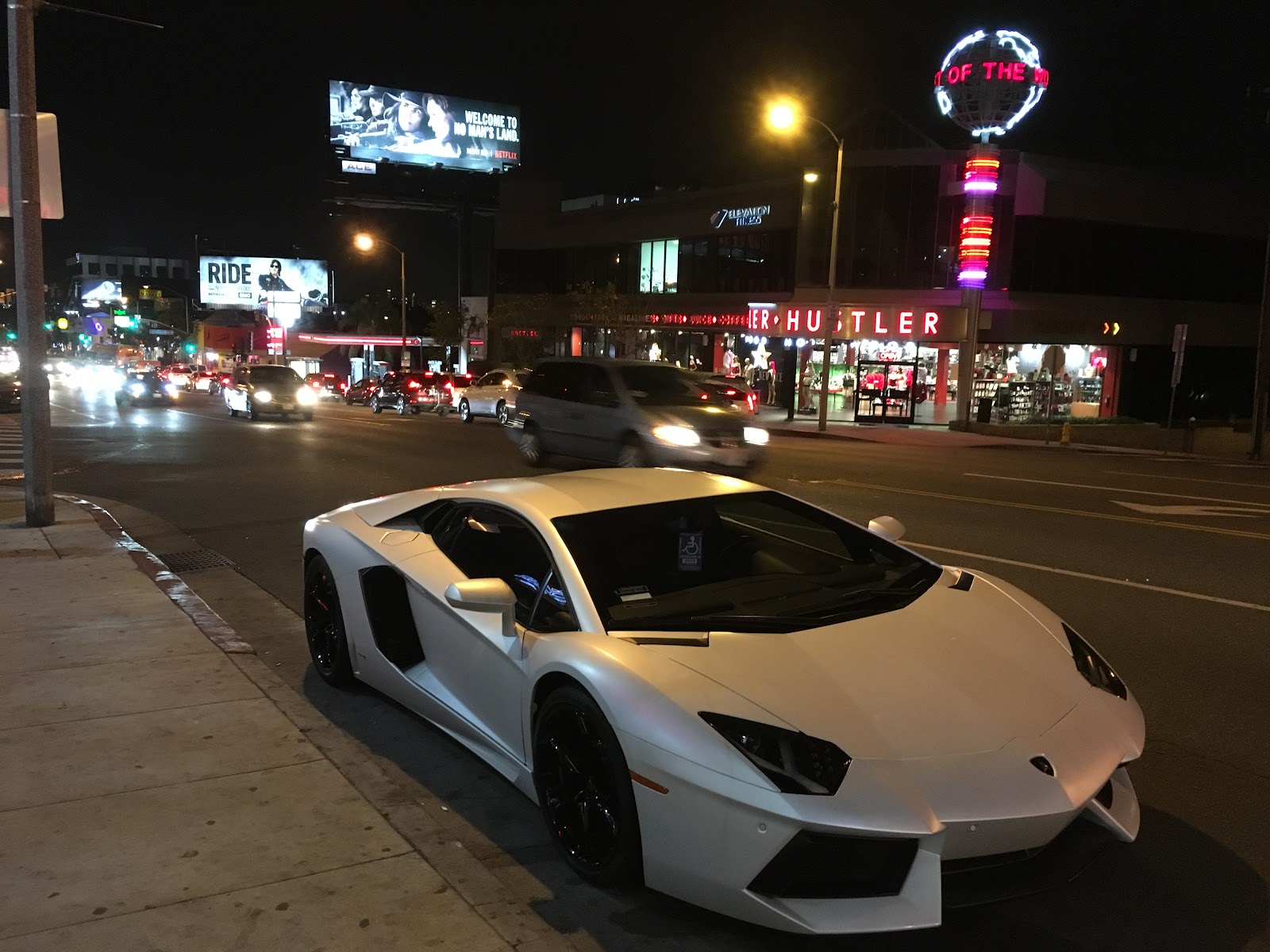 Next up, right down the street from the Roxy is the Whiskey a Go Go. Quiet Riot was on the bill this night, although such a show would be no match for previous ones, like when The Doors got fired as the house band after playing "The End." The Whiskey recently started a channel on Roku with lots of their best concerts available to view. 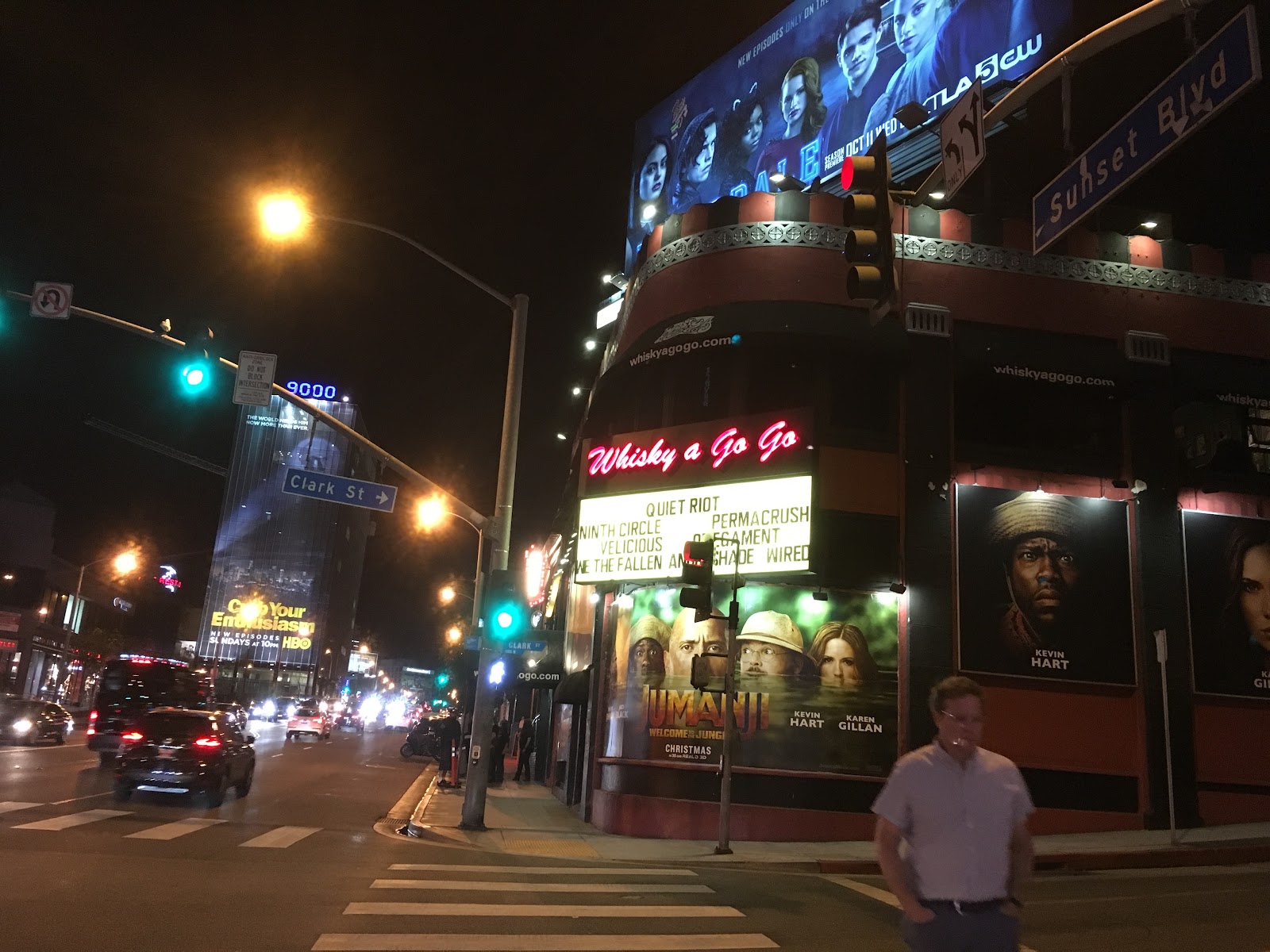 And then the old Tower Records, which, even though is sadly long closed, remains in place as an historical landmark. 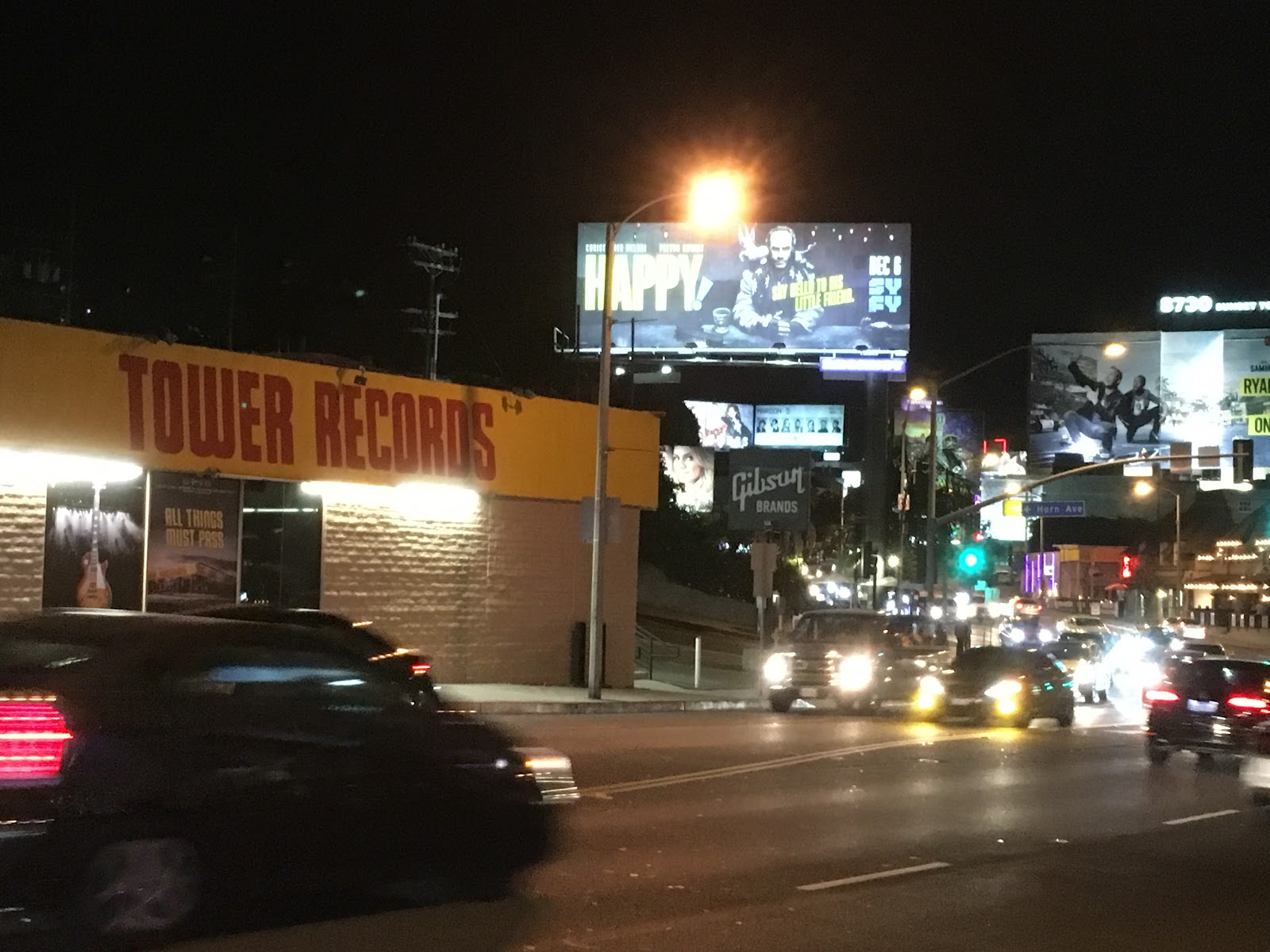 And right across the street, there’s Book Soup, billed as "the bookseller to the great and infamous." Fittingly, it has a pretty killer selection of music books and albums. 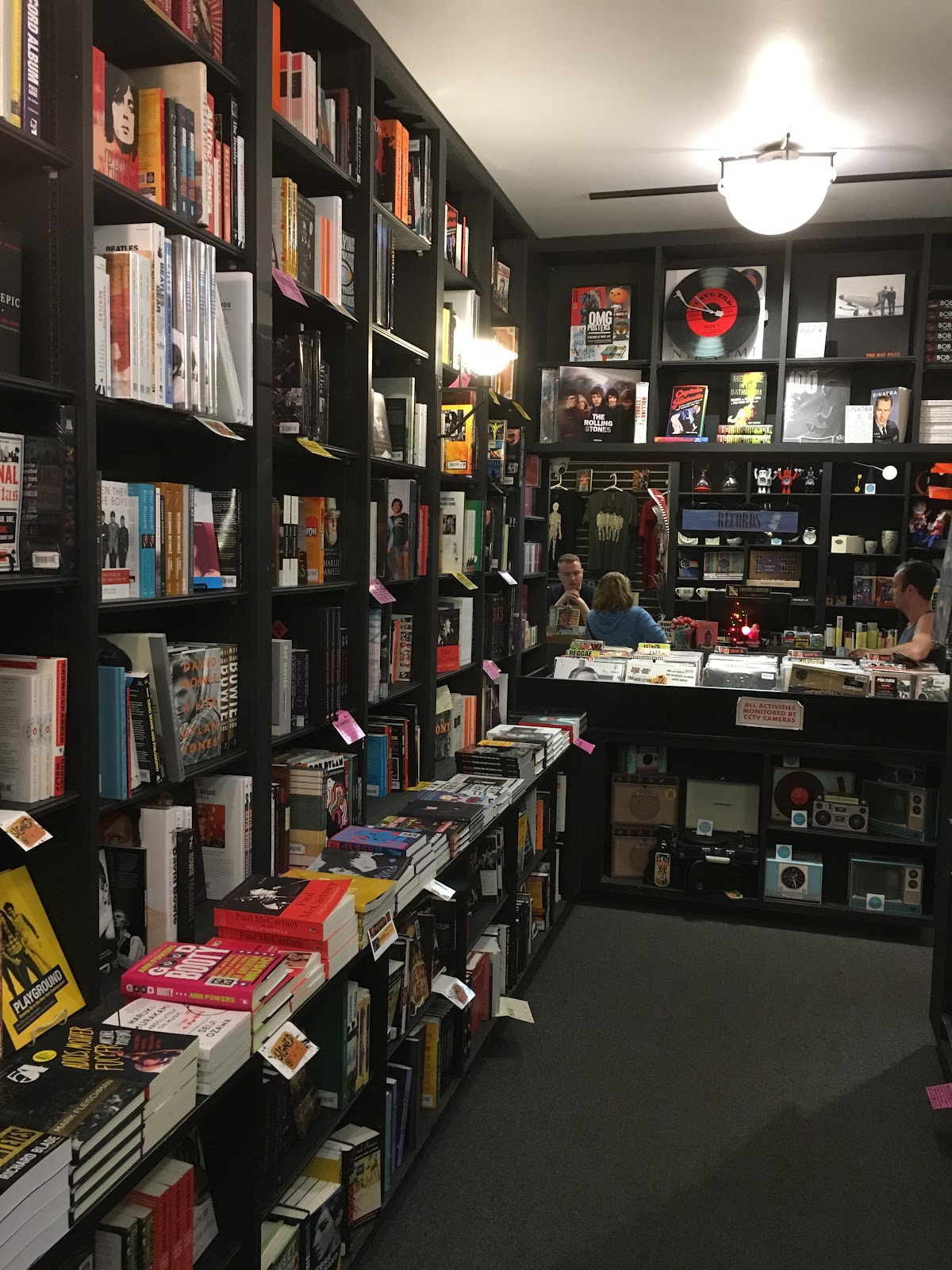 Up next, I walk through Sunset Plaza, which is a strip of upscale shops, with every other person looking like someone who might be famous. I have less interest in this than I do the area continuing on eastward that gets back to being a little grungier. It also starts to look pretty cool with houses pocked all over the hills above.


Oh, and by the way, this is how all those huge movie and entertainment signs get posted around town. These guys were pasting this one to the entire side of this building. 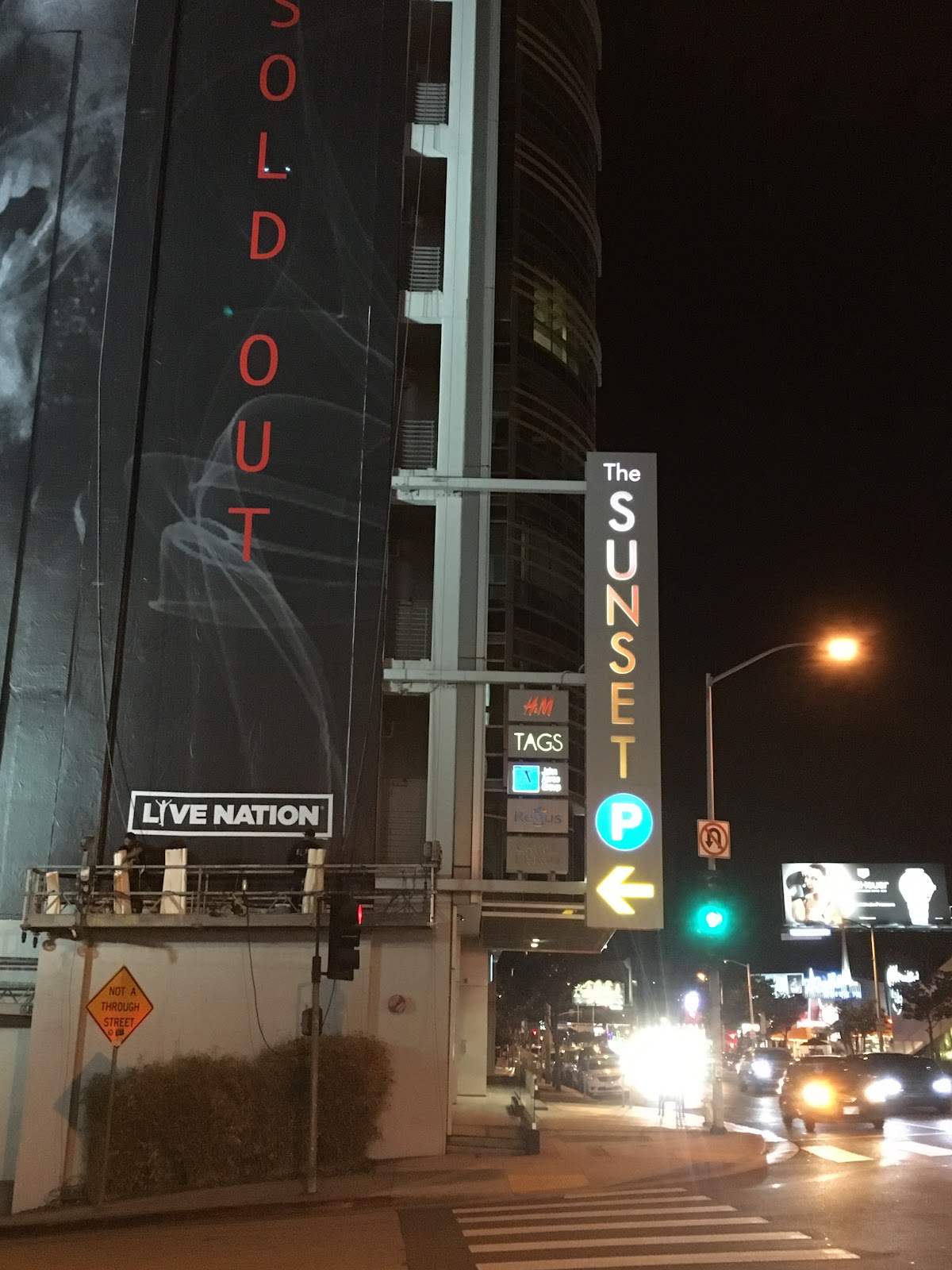 The Fred Segal is supposedly a hot place to spot the stars, but I had little action to report. Perhaps 7 pm on a Saturday night is not quite the ideal time to be walking past. 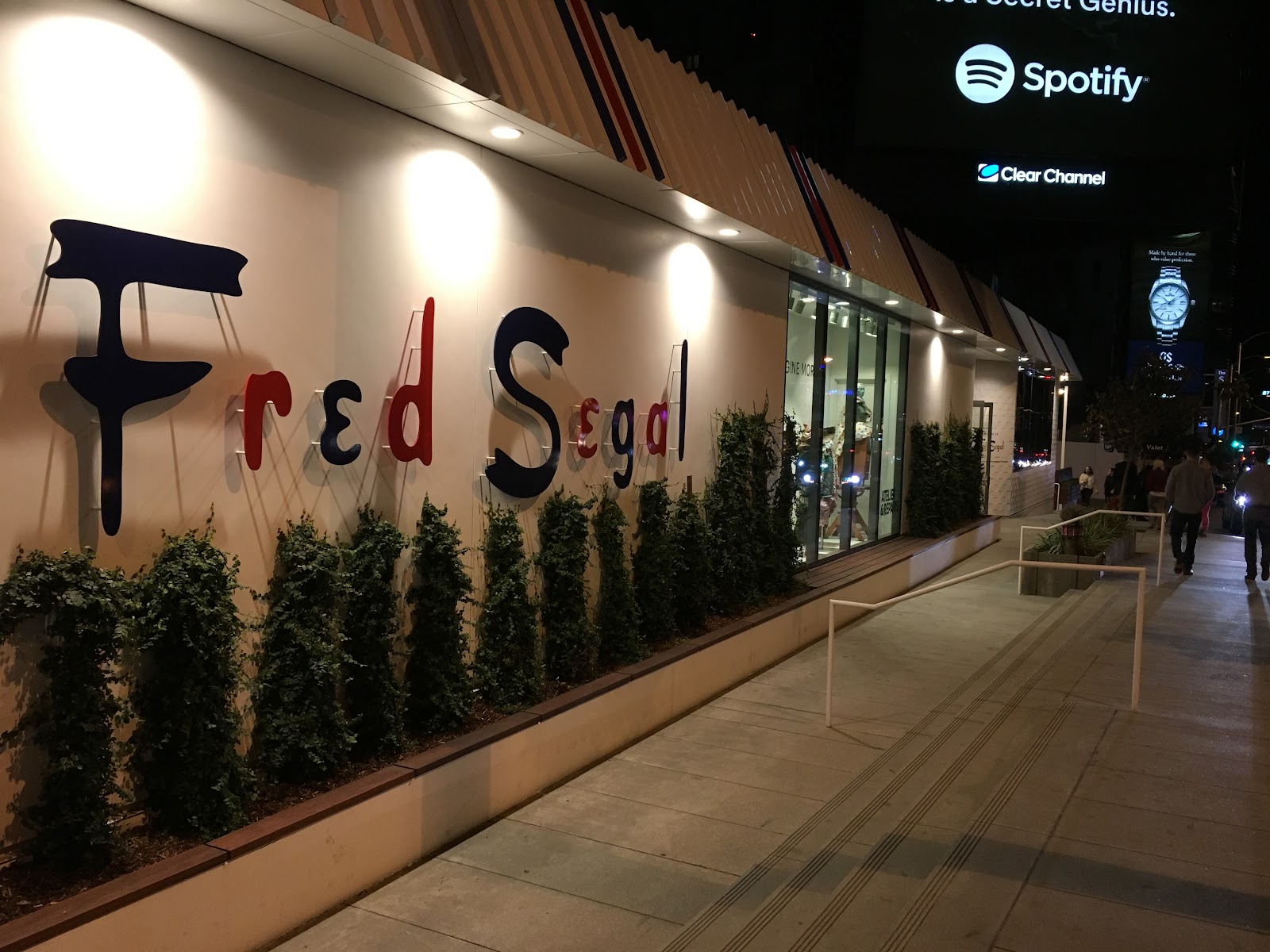 Then the highlight of the walk might just be an overlook nestled back behind some buildings just to the east of La Cienega Boulevard, which runs straight south for as far as the eye can see. Off to the west you can see the skyscrapers of West L.A. and the UCLA area. Continuing scanning onward towards the east, it’s amazing to see just how far downtown is. I think of how it will be an epic trip back there, as the plan is to continue walking on Sunset another two miles until Il get to the Metro Red line. 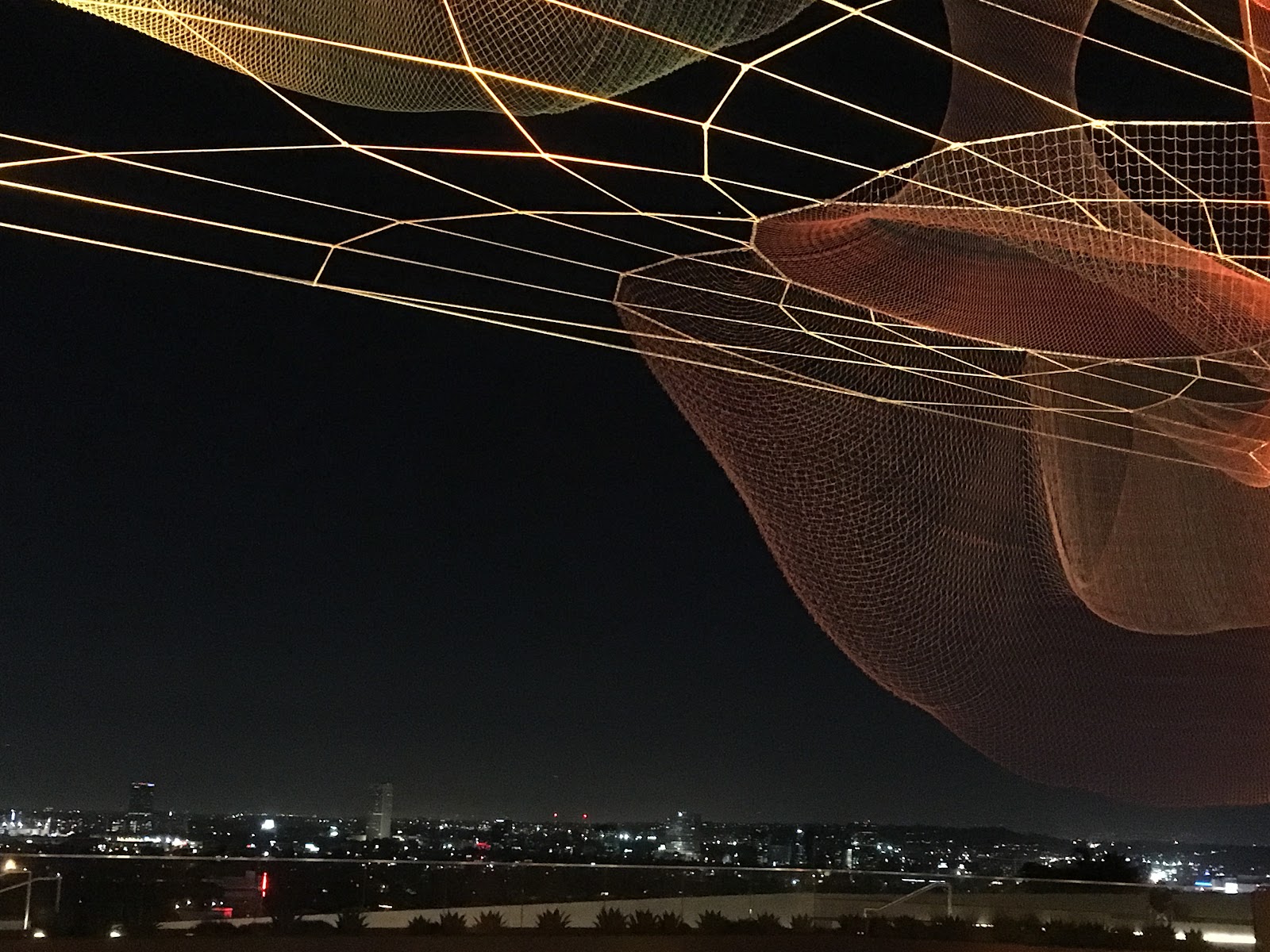 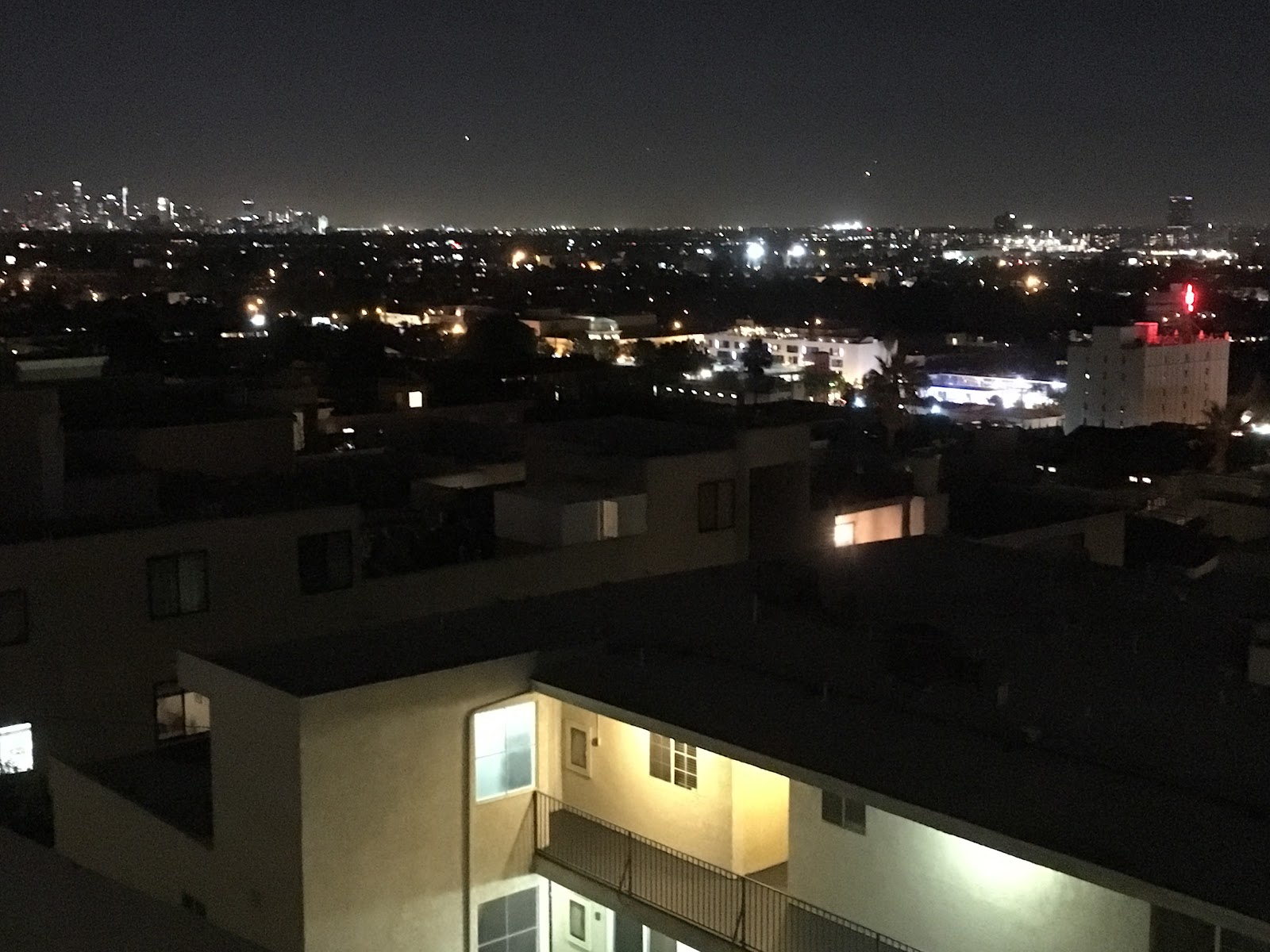 Continuing along, I get to some famous landmarks for lodging, with this ungodly hotel and then the famed Chateau Marmont, where John Belushi died of an overdose and which was featured in Oliver Stone's movie The Doors. 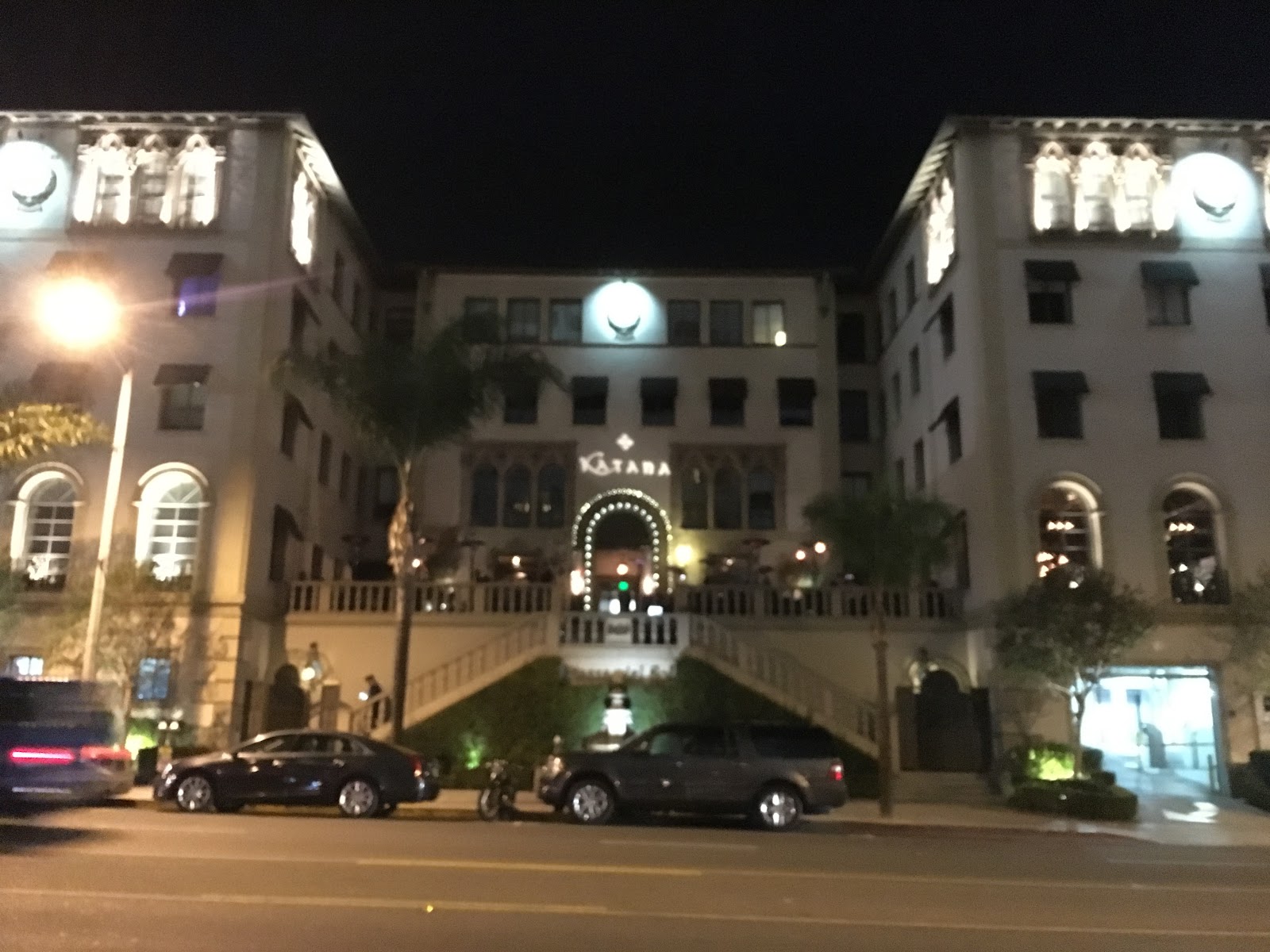 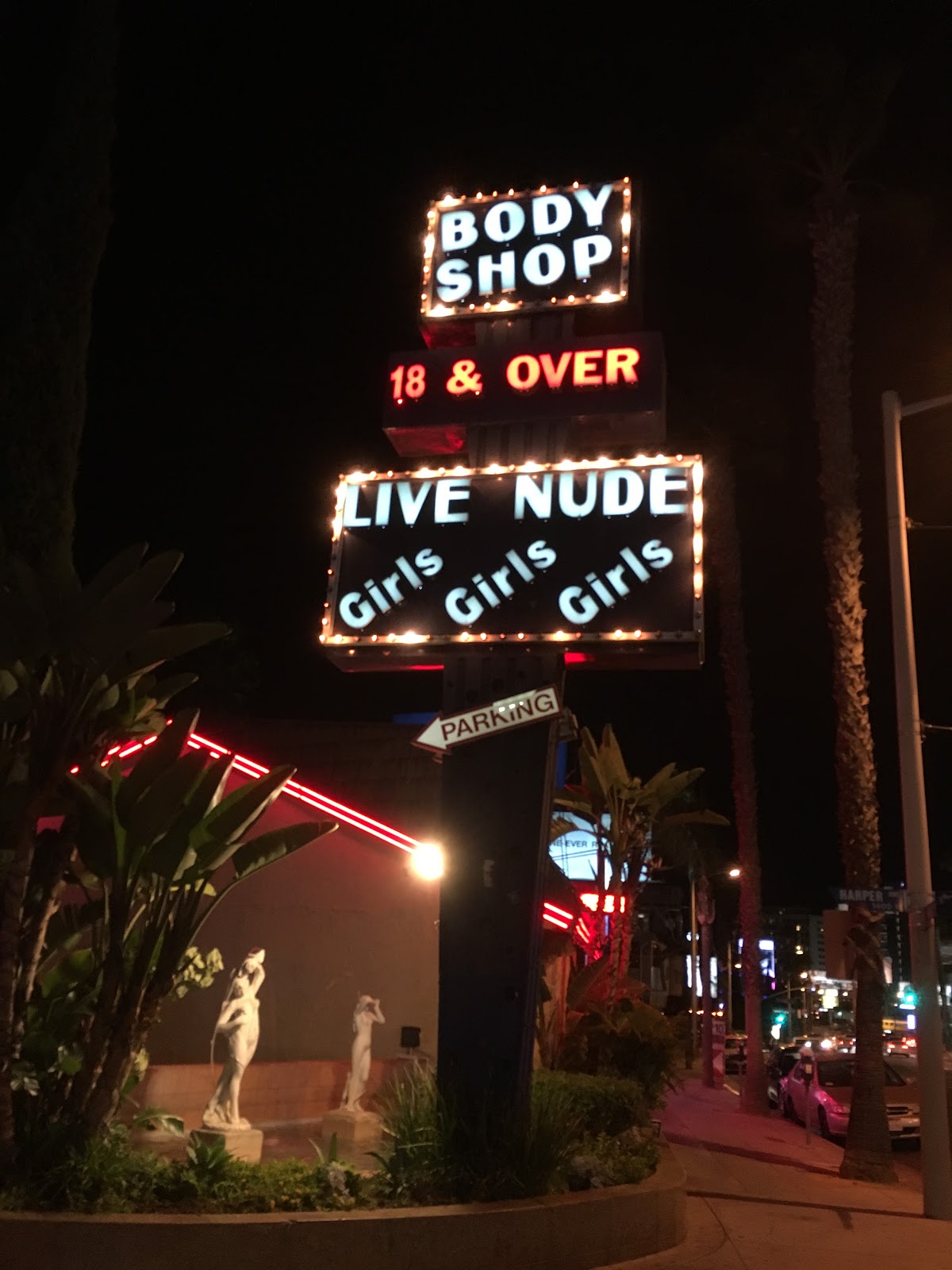 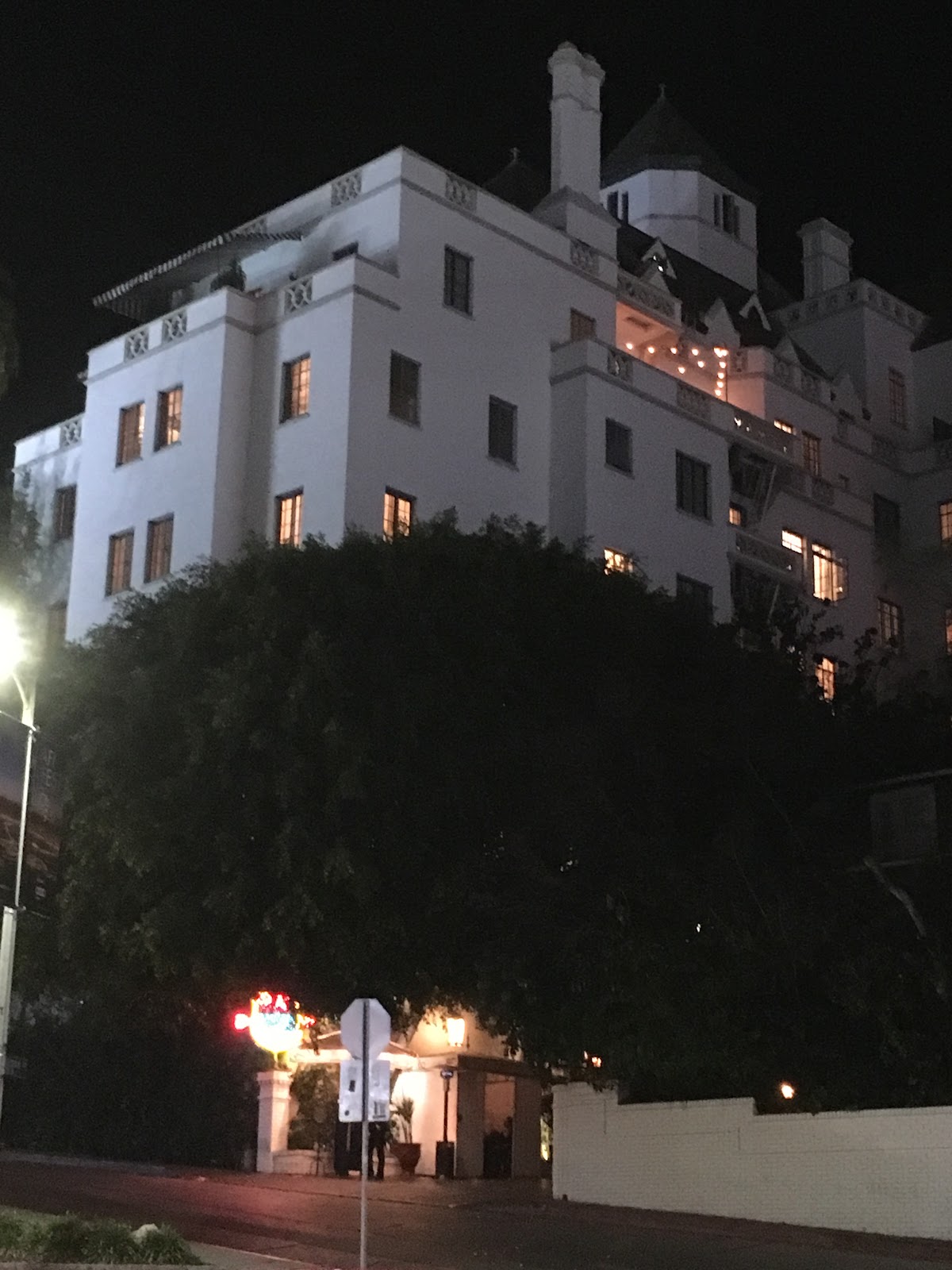 There’s a long stretch for a while with not a lot except for a nice cool breeze in my hair and palm trees. Then I came upon a stretch of music stores that I bit my tongue to keep from going in, worried I would get lost and never want to leave. 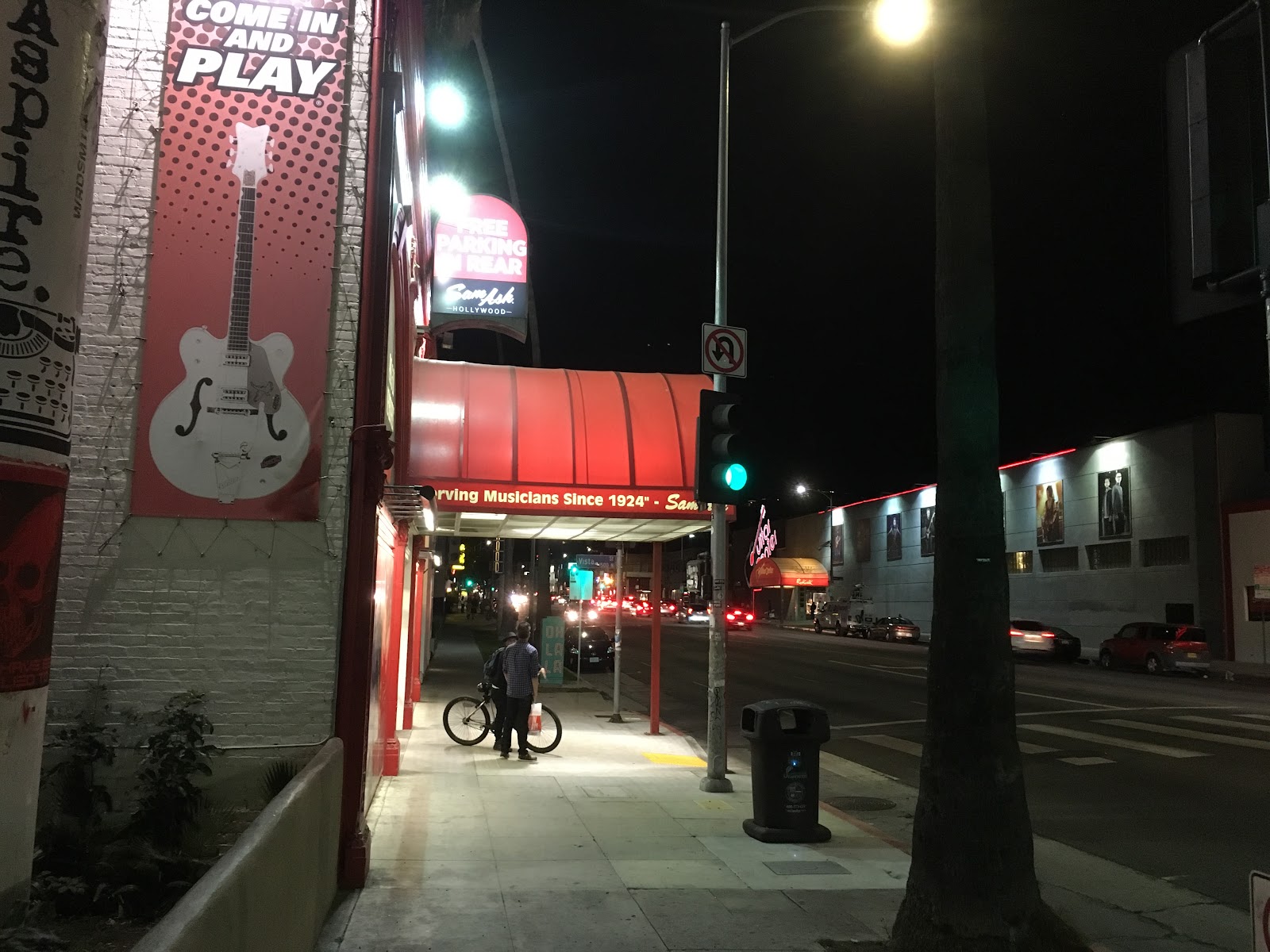 Coming towards the end portion of my walk, I bypass In-N-Out Burger next to Hollywood High School. I’m getting so hungry, but I keep walking. 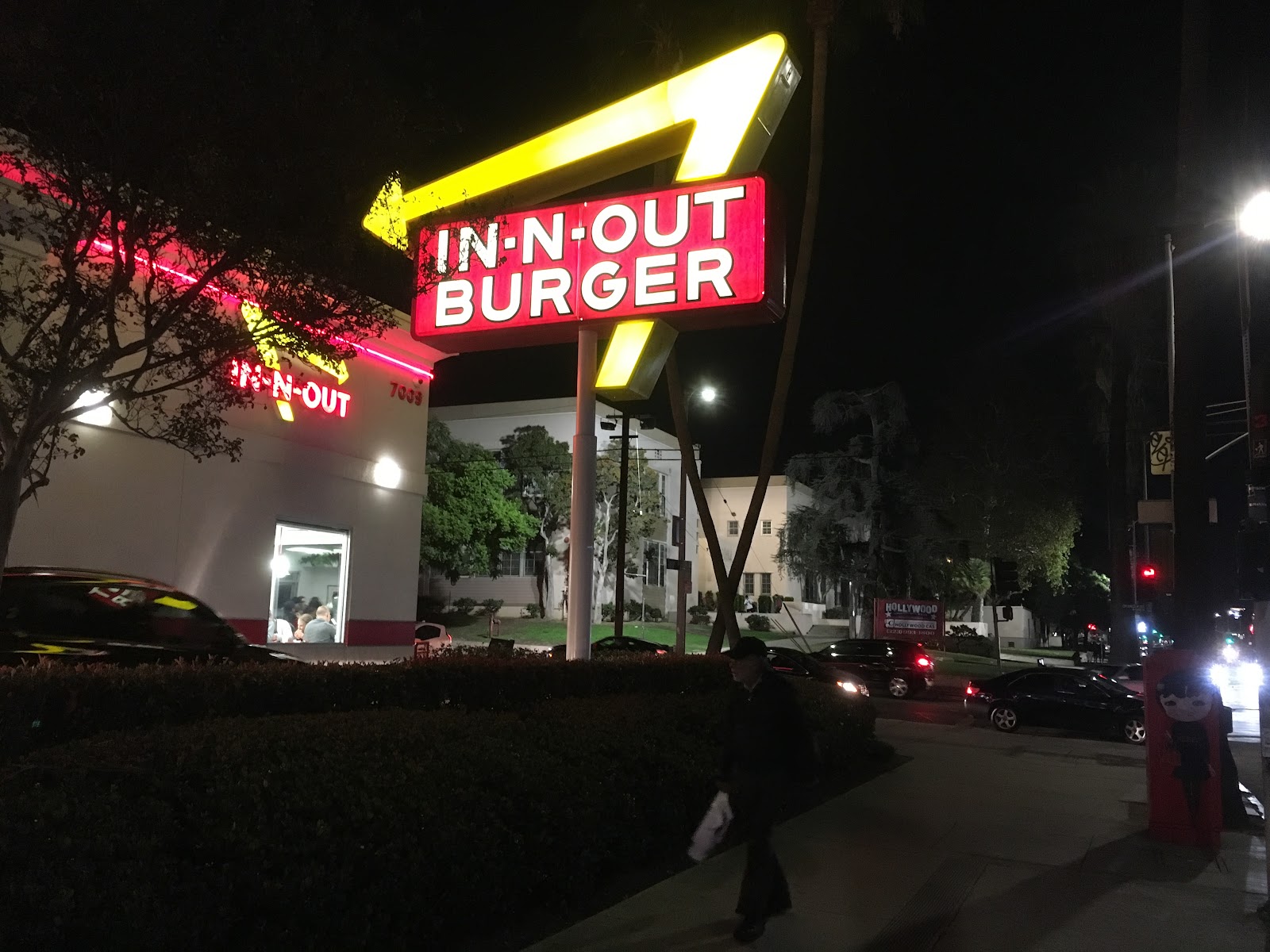 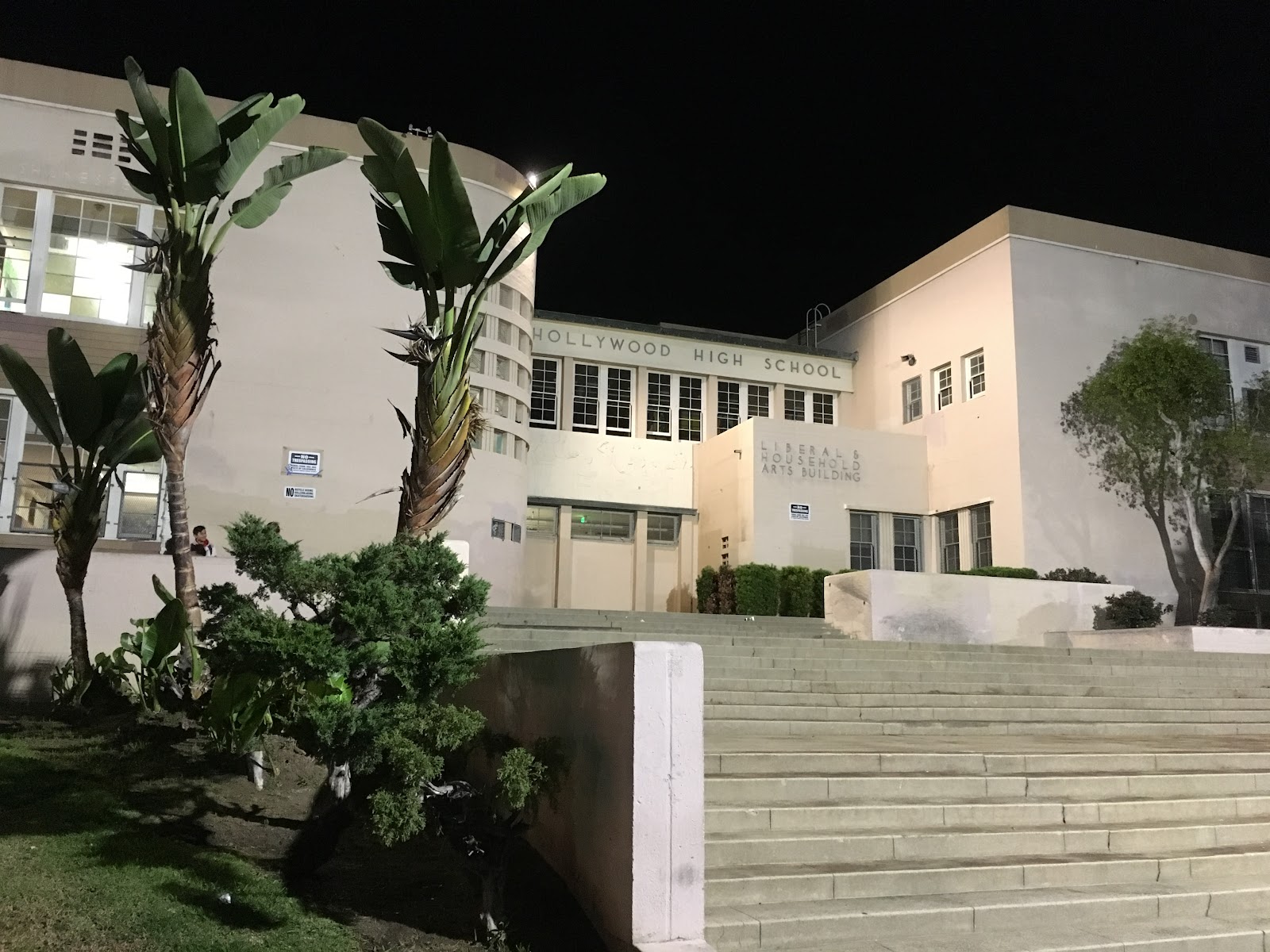 I know I should go to the hotel Roosevelt, with its rooftop bar, but I can’t stomach paying $18 for a not-very-good drink that everybody online says I would be in for.

Going from the Sunset Strip over to Hollywood Boulevard, I enter a whole different world. I wasn't expecting such a mass of people at the intersection of Hollywood and Highland. And of course, the stars on the Walk of Fame cover nearly all the sidewalks. The historical society apparently gets about $30,000 a pop (pay to play) so they will take you if you apply. I was perhaps most impressed by Stephanie Powers, right in front of a McDonald’s. Jonathan Hart would be proud. 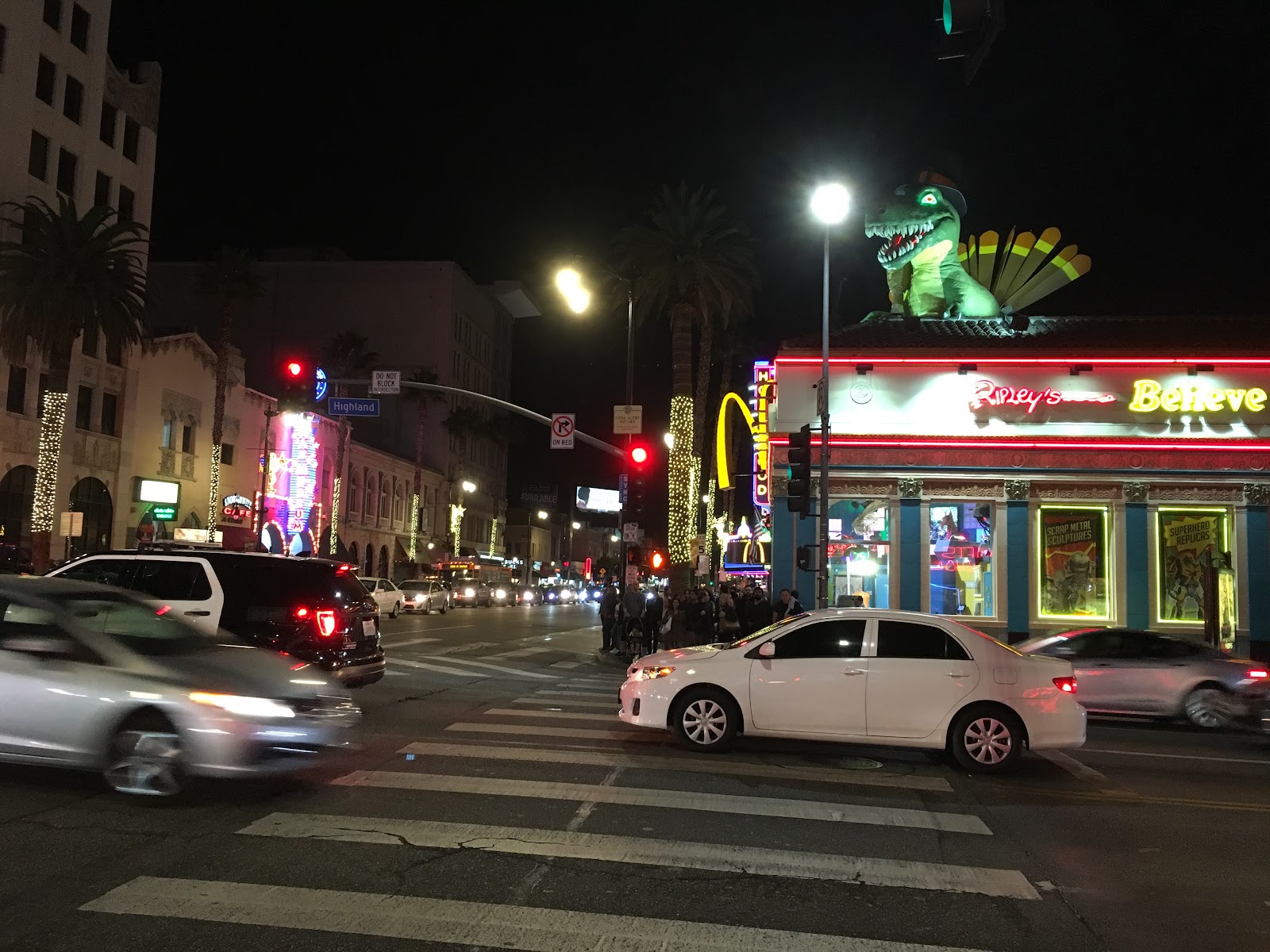 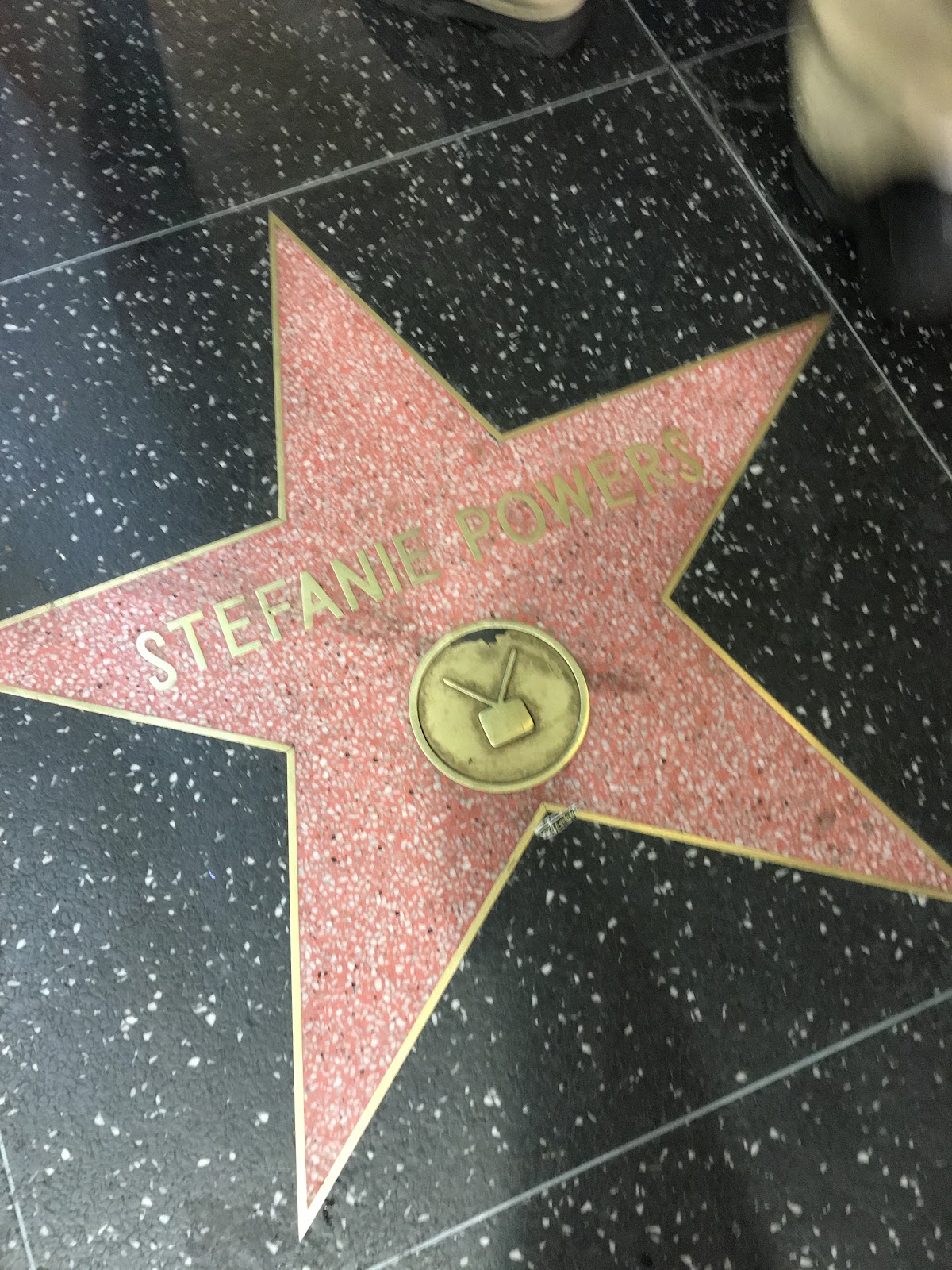 Risking all, I ate next to the homeless kids at the Hollywood and Vine Metro station at a place called Wood & Vine. Not a great choice, but it got my stomach filled for what is a pretty quick Metro ride back to downtown.
Posted by Pop Culture Lunch Box at 1:04 AM