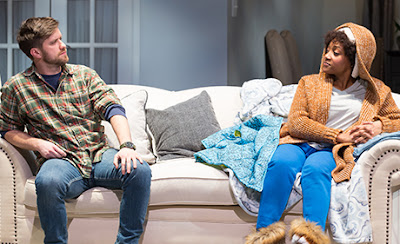 Every time I start to think I'm losing interest in our season tickets to the Wooly Mammoth theater in Washington D.C., another great show like Familiar - which just ended its month-long run - pulls me back in.

The show, written by Walking Dead and Black Panther star Danai Gurira, is everything you could ask for in a stage production. Hilarious. An array of deeply-explored characters. Educational. Relevant and timely.

The story involves a family from Zimbabwe that is transplanted to Minnesota and, when a daughter's wedding is about to take place, all kinds of desires resurface, including the father's proclamation to return to the homeland to complete unfinished business in helping repair it.

I agree with the DC Theater Scene blog:


Some of the funniest scenes occur when Anne tries to teach Chris and his brother Brad (Andy Truschinski) how to properly execute the Roora ceremony. Brad, an army vet and self-proclaimed “family fuck up” must serve as the Munyai, a messenger between the groom and the ceremonial conductor.

Gurira describes Familiar, as “an ode to the African immigrant”, and while the play does a marvelous job of humanizing representations of African-American families, it is also an outstanding work of classic Americana.

This is an instant classic. 5 out of 5 stars
Posted by Pop Culture Lunch Box at 11:19 PM