The best way to do microtransit? Have transit agencies operate it 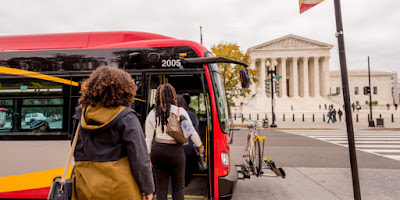 This article originally appeared at MobilityLab.org.


We’ve written skeptically about how genuine microtransit services and ride-hailing companies, like Uber and Lyft, are about truly enhancing transit ridership and accessibility.
For instance:
When I asked four such entrepreneurs what percentage of rides their services provide are “first mile” or to transit, 150 people [in attendance at a recent mobility conference] could hear a pin drop in the silence.
When no good answers or data can be offered in response to such a question, it’s not a long shot to assume the worst. And the worst is? That those entities are actually trying to steal customers from core transit services, like buses and subways, that offer the top societal benefits.
Since microtransit companies talk so much about their services connecting people to transit, it’s puzzling that they so rarely mention specific “first mile, last mile” projects and their results. But with some digging, one can find examples of some good things companies and cities in the microtransit space are attempting.
The Sacramento Regional Transit District (SacRT) just received $12 million from the Sacramento Transportation Authority to begin shuttling people this summer between residential and commercial places that are lacking transit options.
Rides on the shuttles only cost between $1.35 and $2.75 – price points considerably more affordable than taking an Uber or Lyft. And it’s already been working. Since February, ridership has been steadily increasing. (It doesn’t hurt that a commercial hub for riders is the Historic Folsom area, a bustling district billed as “the place where the West came and stayed.”)

The Folsom station is in the right hand side of the service area. Map by SacRT.
Sacramento is hoping people will not only use microtransit to reach the Fulsom business district, but also the nearby train station, which can serve as a major transit artery for the rest of the region.
The city is running their pilot with TransLoc, a North Carolina-based company that builds software to help transit agencies operate their own microtransit services. The company was acquired early this year by Ford Smart Mobility.
Aaron Berdanier, a data scientist who works on microtransit projects for TransLoc, said the project’s target audiences are “people who were not taking the train before because they didn’t have access, and other riders already going to the train station but didn’t have a way to get there.”
TransLoc’s CEO Doug Kaufman added, “SacRT’s success in deploying innovative, on-demand microtransit is a proof-point for the huge potential impact of microtransit across the nation, particularly for riders. We are incredibly excited [that] the success of their pilot resulted in a grant to fund its expansion.”
Berdanier said, “Goals for this pilot were to increase ridership, which they’ve done dramatically, and to plug into this area they didn’t have access for – Citrus Heights. The agency has been very innovative and forward thinking,” he said, noting that this was a great opportunity to enhance Sacramento’s Dial-A-Ride system.
TransLoc also focuses on connecting microtransit to transit hubs in the region between Raleigh and Durham, N.C. In an area with lots of big office parks – including the likes of IBM and Cisco – TransLoc helps GOTriangle make it easy for their riders to use their smartphones to jump on microtransit.

The regional transit center is the green dot in the central right portion of the map, and the agency-selected Microtransit stops are grey dots. Map by GOTriangele.
Berdanier said 75 percent of those microtransit riders connect into the regional transit hub there (see the map) and then get on a microtransit vehicle to take that last mile to work.
This is another reason why it is so important for transit agencies to become key microtransit players. When transit agencies are the ones in charge of the routes (rather than willy-nilly routes that people could organically take or that even Waze or Google Maps could algorithmically take them), it’s more likely there will be better outcomes (such as fewer traffic jams, healthier travelers, and less air pollution).
It’s encouraging that Uber and Lyft are also beginning to understand the need for transit to be at the center of multimodality. Detroit and cities along the Brightline passenger railway in South Florida have partnered with Lyft to get people to transit stations. And Uber paid Metro in the D.C. region $100,000 to keep trains running later after a recent National Hockey League playoff game.
Photo of people boarding a DC Circulator bus by Sam Kittner for Mobility Lab.
Posted by Pop Culture Lunch Box at 12:33 PM