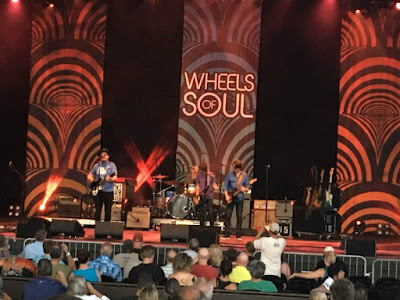 Hard to believe it had been nine years since I last saw the Drive-By Truckers, and even longer since I've seen co-leader Patterson Hood, who was out with walking pneumonia for that show.

Also hard to believe, as long as I've been coming to the Adirondacks, that I'd never seen a show at the Saratoga (N.Y.) Performing Arts Center, an outdoor amphitheater. Stanton, Jason, and I scored sweet seats about 15 rows back in the center, thanks to Rachel's grandmother's "patron" status at SPAC.

The sound was a little too muffled for my taste during the Truckers' set (it oddly sounded clearer when I wandered on the lawn out back). Of course, there is never any comparing to D.C.'s 9:30 Club, where I last saw the band and which always has immaculate sound.

The setlist leaned heavy on the American Band LP, which I ranked as the 36th best of 2016. They played "Ramon Casino," "Darkened Flags on the Cusp of Dawn," "Surrender Under Protest," and "Kinky Hypocrite" from that release. All strong mid-tempo chuggers.

Some of the definite highlights were off the Truckers' classic albums, including the Skynyrd-y "Sink Hole" from 2003's Decoration Day, "Let There Be Rock" from 2002's Southern Rock Opera, and Hood's epic slow burners "A Ghost to Most" from 2008's Brighter Than Creations Dark and "Babies in Cages," which obviously couldn't have been more timely, as America currently licks its chops at taking great pride in ripping families apart from each other.

My favorite was "Marry Me," off Decoration Day, which may be their best best, most signature track. Bassist Matt Patton's (formerly of the excellent Dexateens) showcase Ramones' cover "The KKK Took My Baby Away" was my second favorite moment of the night. 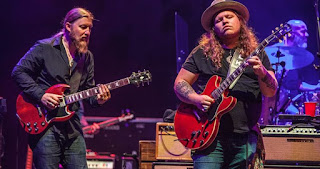 Also, I liked openers The Marcus King Band, and headliners Tedeschi Trucks Band was entertaining too, as the place really became electric once the sun went down after the Truckers' set.