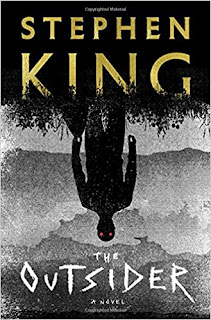 Stephen King's novels often take place in Maine, and could often happen in just about any timeframe.

Some of that could be said for his latest, The Outsider. But it still ends up feeling very much of this time and place. "The outsider" feels like code language for the country's ongoing struggle with what we think immigration means. We as Americans seem to have a very hard time trusting people who aren't quite like us. And King displays how that lack of trust often extends even to the people we think we know intimately well.

Also, the setting is in Oklahoma and Texas (with a little good-old Midwestern Ohio thrown in), places where the immigration debate rages especially strong. Like the epic tale's early protagonist, Terry Maitland, I too studied English and coach baseball. Perhaps that helps me relate especially well.

Maitland is one of Cap City's most loved personalities. But several eyewitnesses catch him kidnapping a young boy who is later found partially eaten and sexually attacked. The townsfolk turn violently against Maitland and his family.

Meanwhile, a second story unfolds through the book's second half, when investigator Holly Gibney comes to town to assist in finding whether Maitland or an imposter who can shape shift into others' faces and bodies is the perpetrator. A group of investigators go on the search to a scary mine shaft in Marysville, Texas, and it's not too much of a spoiler to say some of them won't return.

The Outsider may be the shortest 560-page book I've ever read. That's because it's such a page-turner. Like with many of King's books, this one has so many levels of suspense going on all the time that it becomes painful to have to put down. This is one of several of his books that left me sad that it had to end.

On my list of favorite King books, I put this at #7, right behind Pet Cemetery and in front of Under the Dome.