Three Billboards blows away the other movies I saw this month 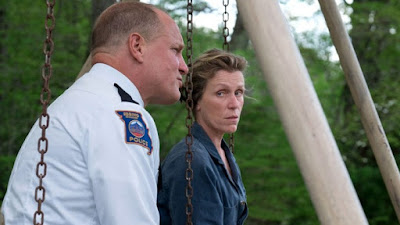 Three Billboards Outside Ebbing, Missouri: This Coen Brothers’ masterpiece had been in my queue for far too long. Finally I got ahold of a copy and watched it at 2 a.m. one night. Woody Harrelson and Frances McDormand, not to mention Sam Rockwell, deserves all the award love they received last year for what is probably the filmmaking duo's best effort since The Big Lebowski (Rented from library; 5 out of 5 stars)

Mary Poppins Returns: The original had lots of memorable tunes, but I’m not sure I’ll remember any of these new numbers for long. The performances by Emily Blunt and Lin-Manuel Miranda are admirable, and there’s a lot of great cinematography, but there’s not nearly enough of a story. (At the movies; 3.5 out of 5 stars)

The Florida Project: I’m pretty much a sucker for anything Willem Dafoe is in. But he’s not really the main focus here. He gets you in the door, but then a bunch of unknown actors play the roles of trailer trash living in a forgotten landscape on the outskirts of Disney World. It's a pretty fascinating look at a way of life, if a bit of an aimless plot. (Rented from library; 3 out of 5 stars)

It Follows: Great music highlights this fairly middling horror flick that tells the story of a girl battling a multi-faced ghost that chases down people who have had sex with her and a string of other unlucky souls. An ok premise but slow pacing doesn’t add to what should be a more suspenseful story. (Netflix; 2.5 out of 5 stars)

Dumplin’: I guess I randomly picked this stinker because I like Jennifer Aniston a lot. This is her worst performance. There are lots of good morals to the story and, as my wife reminds me, "this was not made for a 48-year-old male," but that still doesn’t make up for the deplorable script and bad acting. (Netflix; 1 out of 5 stars)
Posted by Pop Culture Lunch Box at 6:58 PM