Authors fail to understand the public's love of presidential scandals 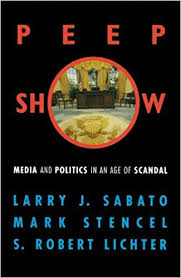 I'm trying to clear out some of my grad-school books. As part of this project, I figured it would be good to revisit and review, for one last time, some of the books I used extensively in my thesis on whether personal scandals helped or hurt voter turnout in presidential elections.

Peep Show: Media and Politics in an Age of Scandal by Larry Sabato, Mark Stencel, and Robert Lichter, reports of a time during the Clinton Administration when the line between public and private was blurring more than ever in media coverage of politics. They found that responsible media was fooling itself into not printing some scandals while seemingly arbitrarily covering other ones. They wonder if some mainstream reporters are simply lazy and bad investigators.

One striking passage early in the book makes a claim that my thesis found not to be true at all:


"The fidelity of elected officials and other personal matters are of little concern to most Americans, despite the attention such stories get in the news."

The authors do back this up by noting that 80 percent of those polled disapproved of coverage of Clinton's extramarital affairs. But Sabato and company failed to wonder if these people could have actually been lying. And what about all those everyday, water-cooler conversations about Monica Lewinsky, Clinton's "I didn't inhale," and the poor academic grades of Bush and Gore?

I largely disagree with the authors' findings in this book and contended in my thesis that Americans did indeed care about sex, drugs, and rock n' roll-type scandals and that they drive higher turnout in presidential elections.

People say Clinton's mistake was the lie, but they certainly discuss the sex a lot more than the lie. What I thought was good from this salacious turn by the media is that it shouldn't have ever been the media's job to offer a "zone of privacy" to public figures (as they had for many years) who have done scandalous things in the past; it's more the politician's job not to run for office in the first place if they've done those things.

The authors also claim the public will tune out personal scandals. But all these years since this 2000 book was published, it doesn't seem like that's holding true at all. People are chomping at the bit for the next scandal to sink their teeth into. Even with the seemingly daily scandals of the Trump Administration, the public still has great interest in reading all about it, and those scandals may drive massive turnout from both sides of the political aisle, potentially resulting in Trump winning reelection in 2020.
Posted by Pop Culture Lunch Box at 10:51 AM